Chapter 11: On the Call of a Siren, featuring Paolo Nutini

They knew how to work a pout.

I was thinking of them last night when out with girlfriends at one of those pampering evenings at Space NK.   When it came to my turn, the make-up artist took me out of my comfort zone with a fire engine red lipstick called "Frenetic Vermillion".  Quite appropriate in a week where I'm onto my fifth parking ticket, and seeing fifty shades of red.  I had to buy it for the name alone.   And also it suited me.  Mr Gray was thrilled when I got home ...


But I digress.  Back to real sirens, and fake mermaids. 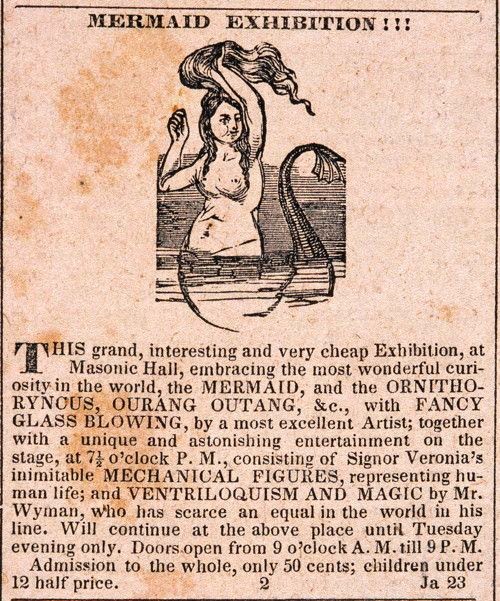 Mermaids were a common feature in circus sideshows.  In Cameron Mackintosh's staging  of Barnum last summer at Chichester Festival Theatre, there was the obligatory splash of a tail peeping out from a trailer on set. What self-respecting circus wouldn't have a mermaid, or a merman, as part of the sideshow?


In real life, Barnum created the elaborate hoax of "The Feejee Mermaid" (as pictured, right), captured off the coast of exotic islands.  Billed as half-mammal, half-fish,  in reality  it looked decidedly male and comprised the mummified head of a monkey sewn onto a fish, with human hair superimposed.  A complete fraud, but Barnum spun the story and made some money.     It is a fine example of the noble art of humbug - a word coined by Barnum himself, with a double-sided coin no doubt.

My last trip to the Roundhouse was for  Circus Fest 2014, maybe that's why I'm trying to put a circus spin on the return trip.

"If every fool wore a crown, I'd be a king and not a clown."
Let Me Down Easy, from the album Caustic Love

Well, that lyric is rather an obvious hook for any circus lover.  But Paolo Nutini's appeal is rather broader than that.  In fact, if I could sum up a typical Nutini audience, it would be "eclectic".  It surprised me.  I had expected a homogenous sea of teenage girls, I suppose.   Part of the appeal lies, let's be honest,  in his looks. Nutini is young, good-looking and enigmatic. When he took his leather jacket off half-way through to reveal the crisp white t-shirt, the collective sigh could have raised the roof on steam alone.  But that's not where it ends.

As a performer Nutini's style reminds me of a young Bob Dylan,  lanky, leggy, deftly tripping across the stage.  Or maybe it's just because he sings with such relish about that Funky Cigarette.


As a singer, Paolo - and here I'd like to think we are on first name terms -  strikes a chord. He sings of love, of desiring, of fighting demons, throwing out a whole host of reference points with which to connect.  And he goes beyond relationships. Thinking here of "Iron Skies" which uses as its touchstone Chaplin's The Great Dictator, the first Chaplin film I ever saw.

And that's the bottom line, really, isn't it?  A connection that chimes with our own personal experience, that makes us feel the world is smaller than it is, that reassures us we are not alone.  That's what we, the audience, the energy vampires like to sink our teeth into.  We feed of those moments of shared experience with a joy, a relief, that makes you wanna scream Hallelujah!

And therein lies his power.  It reminds of another male siren, The Pied Piper, and a great school musical production I saw a couple of weeks ago.   We are like rats, I think after the concert, as the audience floods out and down into the Underground as though returning to the sewer.  I bury my face in the bouquet of roses that my girl-friend, who came to the concert as well, had given me earlier in the evening.  They smell great at least.  After a few stops, a group in very high-spirits get on and start strumming a guitar.  These aren't buskers, these are folk on a mission to get the world singing.  It's funny that only that morning I was reading in the papers about the pensioner who orchestrated an impromptu sing-a-long on the commuter train from Maidstone into London.

A girl in the group chivvies people along.  She turns to me "You look as though you could sing, you'll join in, right?"  How could I resist?  Confessing to having spent the whole evening singing along to Paolo Nutini at the Roundhouse causes them to fall about laughing. Pointing at the guitarist she says "He's just come from supporting him there."  He does look familiar, but maybe he's simply an old soul.  It doesn't matter.   Whatever the illusion, his talent is real. After a few chords of Oasis, he moves onto Loving You filling in the one gap (to my mind) in the Nutini set.  I blush furiously. I hate the sound of my own voice, but that's not the point.  It's about connecting, it's about getting the party started.  I miss my stop.  In a moment of sliding doors, I wonder what would happen if I just followed the band, that promises such fun.  Instead I slide through the door/ With my morals on my sleeve, slipping the troubadour a single rose from the bouquet on the way, along with the knowledge that I'd literally gone the extra mile. It was time to get back to my real family.