Chapter 49: Dining out with Crashmat Collective 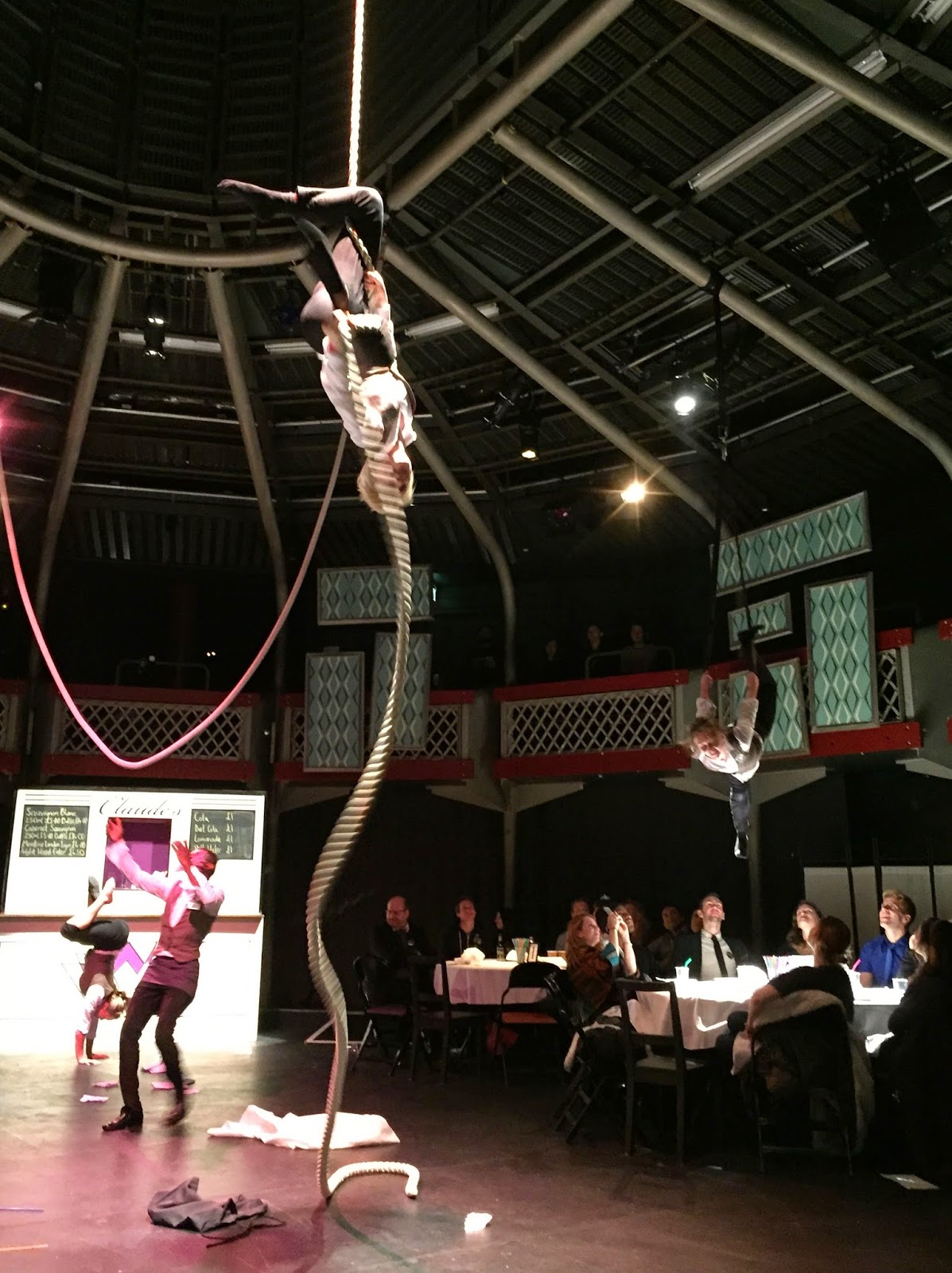 “To see the world, things dangerous to come to, to see behind walls, draw closer, to find each other, and to feel. That is the purpose of life.”

"The Secret Life of Walter Mitty" by James Thurber

Are you a daydreamer? Chances are if you are reading this blog you like a bit of escapism. I certainly do. Taking up circus skills for me has been my way of carving out a dream space, and a natural progression from (over?!)exposure to the phenomena of the immersive experience, whether it be in performance art, theatre, cinema or circus, that has been evolving over the past couple of decades. I love how the fourth wall of the audience tumbles down, and the way boundaries between reality and spectacle blur and dissolve. There is a sense that you are connecting with "the purpose of life". Or simply connecting. Well, anyway, I was curled up on the sofa the other evening watching Ben Stiller as the ultimate fantasist in "The Secret Life of Walter Mitty" and fell asleep half-way through. Before I knew it I was dreaming of having an affair with my own husband in a sequence straight out of Dirty Dancing, and I'm holding Crashmat Collective mostly to blame. Make that thank.

Crashmat Collective is a dynamic, young circus theatre company based in Wales, supported among others by their friends at NoFit State Circus (see Chapter 9 - click here), with whom many in the cast have worked in the past. They are currently touring with their show Façade, where the waiters who serve up the three-course meal are also the performers, acting out a succession of Mittyesque scenarios. It brings new definition to the term "holding down two jobs at once", and it's a surreal dynamic as they flip between the roles seamlessly, fusing the two realities together.  It also makes voyeurs of us all.

Now, the last time I heard the words "immersive dining experience" was when I was invited to the Fawlty Towers experience, so imagine my amusement when we turn up to find our waitress introduced as Polly (Laura Moy). But there the resemblance ends.  Thoroughly efficient, we were each given an acrobatic colour-coded badge to distinguish the meat- from the (waldorf) salad-eaters.  The maitre d' is Claude (George Fuller), who has "impeccable","comic timing", "consummate" and "CLOWN" written all over him, and has you laughing already as you enter the restaurant space. And what a space too, we are seated at tables of ten in the intimacy of the round at The Albany in Deptford. There were six in our party, and while we chatted amiably before and after the performance to the two other couples we didn't know, for the main all conversation was suspended as there was so much to take in all around.

We soon find out what is going on behind the scenes in Claude's restaurant for the gossip is dished out along with the dinner as we are made privy to the waiters' innermost thoughts.  As well as quips about the customers, and a subtext of cheeky banter,  there is an ongoing narrative of longing. Stories of frustrated desire, or simmering anger that take flight in the circus sequences. There is something very Tennessee Williams about it, which is funny because the theme to True Blood is used at one point, conjuring up the southern smoulder encapsulated in the uber-sexy belle Jolene, aka Anna Sandreuter (co-director with Paul Evans), who plays the vamp to perfection in her signature red heels, all hips and hula.

At the other end of the spectrum is Alice Ellerby's naive Rose whose desire is sublimated into her love for her pet gecko, Patrick Swayze, and whose Baby-style character doesn't quite know how to be sexy. But then she hits the cloud (the swing that's kind of a cross between a slack-rope and a trapeze), and literally takes off. Cue Dirty Dancing routine, with the rest of the cast in a choreographed chorus. Rose has "The Time of My Life", as do we watching her blossom, as though incarnating the sexual empowerment and liberation of circus. And how we cheered.

Andy Davies is the war veteran Kade whose backstory hits home, powered by his turn on straps and hand-balancing. Brice, (Kevin McIntosh) was so effortless on cordon lisse that I forgot the involuntary shudder from the prospect of pain that normally happens when I see a rope hanging, and we laughed at the comedy of Libby (Gemma Creasey) and Brice's struggle for managerial power worked out on aerial hoop.

In addition to the beauty, strength and choreography of the circus routines, special mention must go to Laura Moy. It's hard to know which we found more impressive: her skill on the Chinese pole or her verbal dexterity. The rhythm and imagery of her poetry - "I ate a pencil and vomited up the lead" - knocked us breathless.

While the evening was an engaging, sumptuous and imaginative feast for the senses, we were left with one lingering mystery ... what happened to the gecko, pet?!

Note: Façade will be showing at the Arts Depot, North Finchley, on Friday 21st November.
Posted by LucyLovesCircus at 15:10