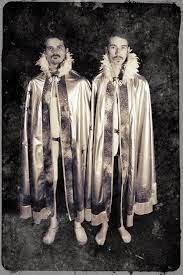 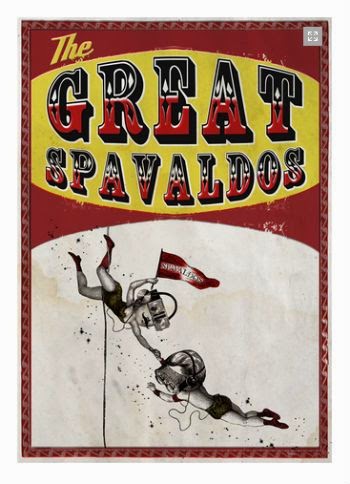 "So last night I was wearing a pair of goggles, clogs and a cape and pretending I was one half of a moustachioed trapeze act The Great Spavaldos and this morning I was learning all about aerial drag acts and a star turn involving a whip and a flaming newspaper over coffee with Boylexe at the BFI cafe. Welcome to my world. Virtually."

Hi, my name is Lucy, and I'm a digital immigrant. Unlike the next generation that has grown up tech-savvy, them, the digital natives, I'm treading on foreign territory, feeling my way through social media, as well as feeling my (digital) age. This was brought home to me at Jacksons Lane with The Great Spavaldos, a show from Il Pixel Rosso, a young theatre company, who use audiovisual technology to take you through a 20 minute immersive circus experience. 20 minutes. My husband was delighted. He'd last been to Jacksons Lane for Midnight Circus in the summer (click here), which he loved, but we are running on empty at the moment, and that sort of time-frame suited us just fine.

We met at the Woodman, "quite possibly the prettiest pub in London" for a cheeky pint.  Within minutes the place, and the pint, was working its magic and soon we were chatting about moving back north of the river... Hmm, alcohol and circus. Do the two mix? I hesitated for a moment. I'd been prevented from going on a trapeze only a couple of days earlier by a large glass of red wine. But then, this would be just an illusionary experience. There's no real danger...?

Wearing headphones that gave the background story we were ushered urgently through dressing rooms, the theatre's haunted corridor (not part of the theatre narrative, just the ghost of knowledge gathered from a previous tour) and into a our very own dressing room where, shortly after our guide became the ringmaster, we morphed into those daredevil Spavaldos brothers,  from a bye-gone era of circus.  We put on a pair of video goggles that occluded all other vision and stepped into the arena. It was extremely disorientating at first, and all the more enjoyable for that. Jeez, I thought, technology has come a long way since The Lawnmower Man.  Having also grown up on the Adams family and legends of the ghostly Hairy Hand of Dartmoor, I was familiar with the concept of a ghostly guiding hand that led us round, re-orientating us. I liked that this one was a beautiful hand, soft, smooth, strong and feminine. Part of me would have liked to go it alone to explore, but the other part appreciated the irony that a disconnected hand was reinforcing an element of human connection in the digital experience. And I think that is important as the type of audience this show attracts will be, in the main, a generation familiar with likes of Punchdrunk theatre and Secret Cinema, seeking out a dynamic interaction with performers, and feeding off that energy.


Soon we were touring backstage a big top, brushing past feathered boas, and the scaled variety, preparing for the performance, taking a bow and then winging our way up to the top to the trapeze for the grand finale. It was very cleverly done. The butterflies and the dizziness were genuine. My husband wondered if I would be blasé about it, having taken trapeze classes, but no. If anything, edging my toes over the platform was a heady rush, enhanced by memories of classes past and the anticipation of ones to come. Maybe there was a smidgen of disappointment, initially, that I would be sitting on the swing, not standing, or hanging from it, but that was instantly forgotten in the beauty of the moment, which involved simply extending the legs, leaning back and soaring into the sky,  immersed in the sensory.

The whole experience made me wonder further about the global connection of circus. It came via a simple question from a Singaporean nonprofit initiative that brings circus to the community and hold the annual Bornfire Festival. They had come onto my radar via Twitter, and an allusion to involvement in projects further afield, such as in India, made me wonder openly if they had come across Circus Kathmandu (click here ) who rescue children being trafficked in circus and give voice to their experience using their own circus language. To hear their stories in their own words  click here and check out their video on the One Percent Club fundraising page.

When Circus Kathmandu had finally made it to the UK in summer, they received a spontaneous standing ovation in the Pyramid tent at Glastonbury. Bornfire wondered if I had seen them perform? Well, no, but thanks to videos and reading reviews like that of Kate Kavanagh in the Circus Diaries (click here for her review of their show "Swagatam"), I felt I had been there, to a certain extent. Not quite the same, but the next best thing. Now, with the likes of Il Pixel Rosso's technology and flair for spectacle, maybe one day we'll be able to engage more fully with performances on the other side of the world. Imagine.