Chapter 165: Running away to the circus...an afternoon with NoFit State 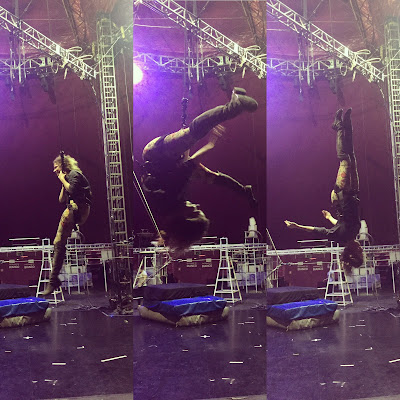 Some people never grow up. I still take a childlike delight in a world filled with infinite possibilities. There have been a fair few knocks along the way, don't mistake enthusiasm for naivety. But each time I feel a bit jaded, the universe gives me a gentle nudge, as if to say, don't give up dreaming. Not just yet.

A few years ago I watched NoFit State's Bianco and imagined running away to the circus. As Lyn Gardner once wrote after watching the show: "If you don't want to run away and join the circus afterwards, you probably need to check you have a pulse." I started learning circus skills. Tentatively at first. I enrolled in a polefit class, well that news spread like wildfire at the school gates... In my vest top and hot-pants, NoFit State emblazoned in pink across the bum, it took me several weeks to manage a few steps of a climb - I really was in no fit state! - several more for an invert and then a month or two after that, finally, off came the fake tan. Growing in confidence, I then signed up to an experience day at the National Circus with a dozen girlfriends which segued into evening recreational classes, and a foray into fire-eating. I started writing a blog to chart the (mis)adventures of a slummy mummy like myself, only to find it was much more interesting to write about other people. But the more shows I saw and wrote about, the less time I had to train myself, and by summer this year my training was dwindling away.

Hearing the NoFit State circus was back in town rekindled that spark, motivating me to pick up classes (see below*) again and fight for that ever-shrinking physical space. How wonderful then to be invited along to an afternoon's workshop with NoFit State, thanks to the blog that really they had kickstarted. It felt like the (cyr) wheel had come full circle! I went on Tuesday with about a dozen other bloggers and vloggers, including those from on-line publications like The Londonist, Theatre Bubble and This Is Cabaret. Some had seen the show, I'm sure, but none of those to whom I chatted had seen it on Southbank and this was their first time in the Big Top. As we walked into the tent, noting the tightwires set up and François rehearsing on them made me wonder if I couldn't just skip the practice and sit and watch. Seeing the footwork unobstructed was a real treat and the jumps, and trophy backflip, as ever filled me with awe. My own tightwire is in storage. It's a small one, but I have a fantasy that one day I will have space to bring it to London and practice regularly, go back to evening classes at National Circus and learn some tricks. Maybe not backflips, but a pirouette or two would be fun. My tightwire boots (www.isabellamars.com) are made with the soles of ballet shoes after all.

Split into groups we rotated round three activities: hula-hooping with Blaze Tarsha, juggling with Lee Tinnion, and counter-weight aerial (taking turns to scale the scaffolding tower and bungee around in a harness) with Joa Aussibal and Topher Dagg.


Hulahooping was fun. Straightforward hooping round the waist was literally child's play for me, ever since we took the kids to Camp Bestival a couple of years back, but the tricks were something else! Hooping round the knees, ankles, wrist and neck, I wondered if there was any part of the body Blaze *couldn't* hulahoop from, only for her to bend over and show us how to spin a hoop off her bottom (François' party trick - keep your eyes peeled in the show!), and most intriguingly round her hair bun. I loved the fact that David in our group, who thought he would be at sixes and sevens, was the first to get the trick flicking the hoop up and over from the ankle bone, and I was over the moon to get there eventually too. 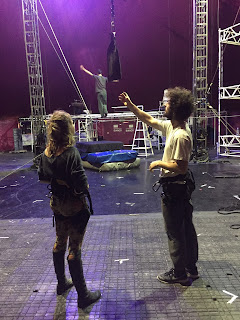 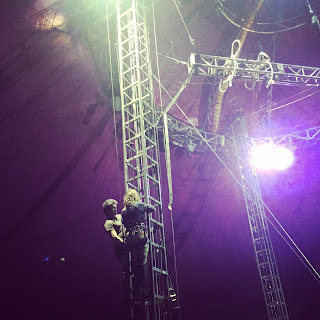 Counter-balancing rocked. Flying around on a bungee in a harness was bliss, my own Peter Pan moment in the panto season - life really is better upside down! -  but it was climbing up the scaffolding towers and sliding down that was a revelation. You really do feel the weight of the other person, how sensitive the movements are, how vigilant you need to be at all times and the faith required. It's interesting that both Topher and Joa have backgrounds in rock-climbing and mountaineering. In both of them I found a familiar deep calm and rooted steadiness that comes with an appreciation for the natural world. You would instinctively trust them with your life. I also envied them. I mean, it was so much bloody fun and they get to do this all day long?!

Finally, the juggling. Brightly coloured metallic balls, rays of sunshine and a dollop of a red nose. We worked through a few exercises, my favourite three ball trick was called "tennis", where Lee used an overthrow from side to side to bat a ball back and forward, it was just so gratifying to watch. Lee made a variety of combinations look so easy, I'm not surprised he has a degree in maths; he's a natural puzzler.


The time flew by, thank you Blaze, Lee, Joa and Topher. I soaked up the vibe, the buzz of concentrated activity, and I loved looking around at the performers warming up alongside workshop participants having a ball. The tent really was like one big love bubble, and that energy shone out. I left wishing everyone could have a piece of this, and you can, it's up to you. Go see NoFit State's show Bianco and see where it leads. Let me know how you get on, I'd love to hear about it. Oh, and have a go on the flying chair ride outside. Floating out afterwards I clean forgot. Again. Ah well, I'll just have to go back...

*Interested in running away to the circus? Below are the circus spaces in London where I've had so much fun hanging out over the past couple of years. You can google more, search them out, and roll up, roll up:

This weekend both Polefit London and Flying Fantastic have their student showcase on Sunday, 11 December, and My Aerial Home has a circus panto on Saturday, 10 December, which will give you a great idea of what you are in for.

And if NoFit State's "Here Be Dragons" leaves you with an urge to breathe fire, the place to train, damn hot on safety, is with Sarah Harman at The Fire School in East Ham. www.thefireschool.co.uk