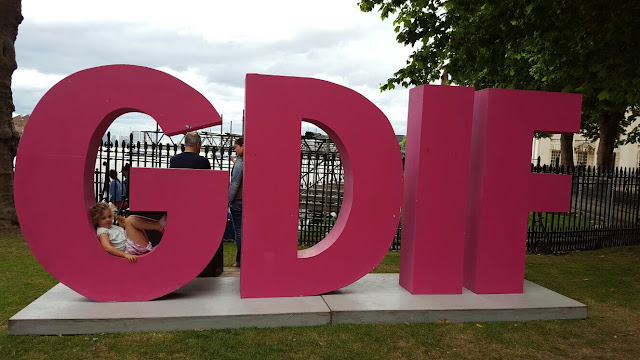 What is GDIF? Good Dinner In Field? Great Day Impromptu Fun?! I was asked the other day by a friend who tried to decipher the acronym from what she could deduce from pictures shared on Facebook. Well yes, it is that, but it actually stands for the Greenwich and Docklands International Festival, an outdoors arts festival packed with  street theatre, circus, dance and all sorts of impromptu happenings, now in its 20th year. I take it for granted that everyone has heard of it, so firmly it is embedded in my diary, and yet I only came across it a couple of years ago myself. I was in Greenwich for the wedding of friends, and meandered through the festival on the way back from the breakfast the following morning. I watched Collectif Malunes (click here) swing from trapezes that in an inadvertent trompe d'oeil appeared part of the rigging of the Cutty Sark, wishing my grandfather were there, I saw exceptional acrobatics on the Russian board from 15ft6 (click here), and caught Gandini Juggling rocking it with 8 Songs (click here). I missed the festival last year when Mum was in hospital, but was back this year, this time with the whole family in tow.

I looked through the programme in advance and highlighted a few items I wanted to see particularly, but taking kids of different ages and interests makes life unpredictable, and part of the charm of a festival is often as much the unexpected encounters and happenings... 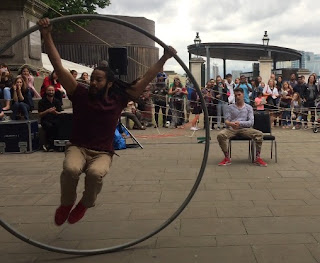 Actual Reality Arcade
A case in point. Computer games in physical from requiring human interaction - inspired! We particularly loved Donkey Kong and I found puzzling out stacks of shapes in Tetris as satisfying as ever. The kids loved the ping-pong bat with ball attached with elastic with which they would knock down a brick wall,  threading their way through an alarm of red string, and my youngest spent ages popping her head through different holes in a box avoiding a foam mallet. Simple things amuse.

Simple Cypher - Roll up, roll up
Simple Cypher were one of the main draws for me, as I have heard so much about the mesh of juggling, hiphop and Cyr wheel acrobatics of Kieran Warner and Christopher Thomas for a while now, and knew they'd have the street cred vibe my son would appreciate. So Mum, is this dance or is this circus?  He was hooked. I noticed my five year old quietly imitating their hand gestures and other kids couldn't help but gravitate towards them, literally at one point when a small child legged it into their space, and was scooped up and returned to their parent by Christopher with grace and humour. Bet that didn't happen in January at The Place (the centre for contemporary dance) I thought, and wondered how the piece changed according to its environment. What is clear is that it works in both settings because these two have charisma, and, like Barely Methodical Troupe in the previous post, have a piece here that appeals to circus newbies and the circus savvy alike. Catch them next at Jacksons Lane on 26 July in an evening mashing circus and hiphop where they will be joined by guest artists for Cypher Stories  www.jacksonslane.org.uk/whats-on/cypher-stories. 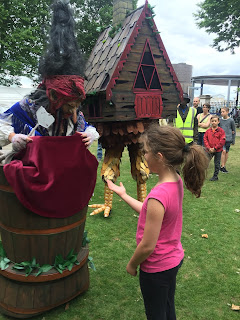 Dizzy O'Dare's  Baba Yaga
I know Dizzy O'Dare through their tightwire. Most recently having seen the beautiful show Rise, which is premiering at the Worthing Summer of Circus Festival (see post - click here). They also do street performing and I was very much looking forward to seeing Baba Yaga, the wise woman-cum devourer of Russian and Finnish folklore. She featured largely in my childhood thanks to the magical retelling of the the story, illustrated with silhouettes against backgrounds of sunsets, by Jan Pienowski (also the author of Mog & Meg!) in Kingdom Under The Sea. Others may have come across the legend through the Hellboy comic series (I hear). Either way, the witch,  gratifyingly sinister with wicked ad libs, glided across the ground like a dalek, with a hut on chicken legs in tow, and it was utterly brilliant. My 8 year old laughed with a side order of relish as she was inspected as a potential dinner and found wanting (needs fattening up!). Others let out squeals as a water pistol was aimed through the hut window. My friend Heather and I were embraced as "Sisters! When shall we three meet again?!" Hopefully sooner rather than later Baba Yaga... 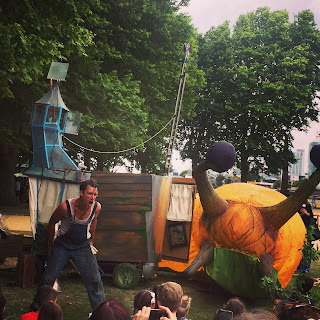 PifPaf's Seed
I was delighted to catch PifPaf's show SEED after narrowly missing it at the Wandsworth Arts Fringe where I saw Hikapee Theatre's Home (see post - click here).  Seed was the tale of one man's energetic fight against slugs that threatened his crop, whether enlisting the help of his puppet pet chicken or electrocuting them. There was something of the inventiveness of a regular Caractacus Potts about Wilford's ramshackle hut. His character,  in his jean dungarees, greasing back his quiff in the mirror and fed up to the back teeth of slugging it out, had an air of an anarchic hillbilly crossed with John Travolta. I loved the moment when, with the gravelled tones of Louis Armstrong, he sang down a hosepipe about his blues at the lack of rain. The sponge slugs grew progressively larger until one took on the inflated dimensions of a bouncy castle and swallowed him whole. It was very cleverly done, and when Wilford finally got his wish there was a joyful rain dance that all joined in. 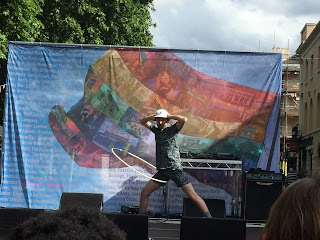 Tom Ball
There are two things I know about Silver Lining's Tom Ball. He has a beautiful voice, and he is a superb aerialist. As well as at Jacksons Lane and National Circus I have seen him in other spaces too - at Edinburgh in the Hitchcock tribute cabaret (click here) and in Extraordinary Bodies in Dulwich Park (click here). I misread the programme though, and instead of a solo on trapeze I found him on stage with an awesome rainbow backdrop in Hawaian print doing a hula-hoop routine to Queen's Don't Stop Me Now, which had us all dancing in the street, having a good time...

Sir Ian McKellan
The crowd suddenly shifted to the other end of the street. What's going on? It's Ian McKellan, somebody shouted out. I heard the familiar booming voice long before I caught sight of a navy blue panama hat and sky blue suit, and scaled a wall to rest on a ledge to get a better view - circus training has its uses! I thought of my Cuban friend Cheddy Mendizabel, who came over to the Royal Court as a playwright for a season of readings of contemporary Cuban plays. McKellen read from Norge Espinosa's play Trio, directed by Richard Wilson, and the playwrights asked me to take a picture of them all together later when we were on the balcony chatting. I had to get the roll of film specially developed, and took the photos out to Havana the following summer. Ah, they would have appreciated this talk, I thought, and wished they were here to listen to him speak on Section 28, gay rights and how lucky we are in the UK to have freedom of speech. The speech was followed by a moving duet by a couple of young male dancers and then the crowd dispersed under a blast of pink confetti. Ever the magpie I watched my youngest scoop up piles and dance around throwing them in the air  for an encore. GDIF sparks  all sorts of spontaneity and that is the joy of it. A day well spent celebrating life and love.

Note: footage inadvertently recorded in slowmo is an interesting study in motion, sill better to catch them live...
Posted by LucyLovesCircus at 04:33