Last Friday at The Vault Festival I saw Chivaree Circus' Becoming Shades, the creation of Edward Gosling and directed by Laurane Marchive, and I cannot think of a more atmospheric venue that charts Persephone's journey into the Underworld by way of a darkly sexy, immersive circus promenade. Just my cup of pomegranate tea. I've been going to the Vault Festival for a few years now and each time experience a frisson of delight coming out of the busy concourse, skirting round the side of the main building, always with a nagging doubt that this is the right path, until arriving at the stairs that lead into a yawning, cavernous mouth of graffiti, ready to swallow me whole. It does feel like crossing over the threshold into the London Below of Neil Gaiman's Neverwhere, and has the magic of an alternative space where you are never quite sure what adventure is in store. What show could be more apt? 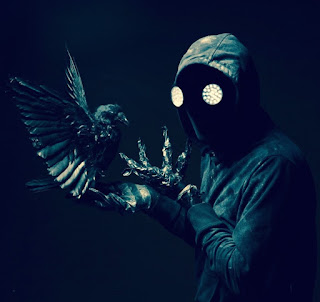 "Here's a mask. Please put in on when instructed and keep it on for the duration of the show." We opened up a little cellophane package that revealed a black mask to wear over the lower half of our face. I was amused to hear one punter had tried using it as a blindfold. Maybe he wanted it 50 shades darker, who knows?! Punchdrunk from other immersive experiences, I liked the illusion of anonymity the mask gave, and the anticipation of interaction as one by one we were becoming shades. 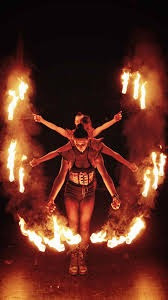 At the back of the crowd I caught glimpses of a creature up ahead that by rights should have been rather sinister, with glowing rings for eyes, a gas mask of a face and light-tipped fingers, but who from the get-go amused us with his mime to a retro voiceover advising the audience on appropriate etiquette. This was the skeletal Charon, Malik Ibheis' Ferryman reeling us in with his clowning and ushering us over to the dark side, aided by his Hounds of Hell, three bitches, fierce and bold, played by Rosie Bartley, Jessica Pearce and Isobel Midnight. In an interlude of comic relief later, on his pier, complete with deckchair and thermos, the Ferryman attempted to demonstrate the steps involved in taming one of the Beasts. Of course he didn't manage it and I smiled -  "no heavy petting" had been part of the in-flight instructions earlier after all.  I liked the re-gendering of Cerebus, shades of circus strongwomen who sniffed around the audience and then took centre stage in a fire fan dance that was as dazzling in choreography as the patterns of flames were mesmerising. And when at the end of the act Hells' Belles disappeared through an arched doorway at the back, it was all I could do not to follow and explore what lay beyond. 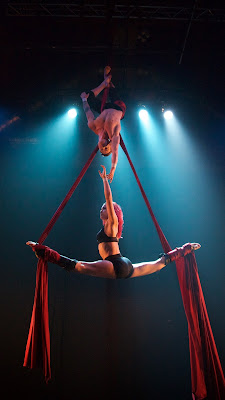 There wasn't a textual narrative as such, but there was a sense of progression as a river of music carried us along Persephone's journey into the Underworld, and the live concert, a bespoke score created by Sam West, was worth a ticket in its own right. I loved the Scottish inflections in the stunning vocals of Sam and Becks Johnstone that laced with Celtic fire lines that spoke both of the torture of love and the need to resist the urge to lose heart. "The only mistake is not to love, the only mistake is giving up". At the end of the first week of a new presidency where it feels that the world is going to hell, that sentiment had a particular resonance: #lovetrumpshate. The costumes and the special effects were lush - there was a pomegranate that opened in two and bathed Persephone's face in a warm, red glow; silken robes that billowed out into majestic wings; a headdress of laurel and feathers; votive candles handed out among the crowd, touches of remembrance... all served to endow the performance with a sense of rite and rituality.

In a deceptively gentle start Persephone took the floor in an acrobatic dance, then partnered with hand-balancer par excellence Craig Gadd as a broodingly kohl-eyed Hades, who later performed a wickedly seductive routine, casually swiping bites out of an apple in one hand (before tossing it to the dogs!) all the while inverted on canes held up by the other arm. But it was in the aerial sequences that Rebecca Rennison as Persephone really soared. Her solo on silks was a powerful testimony to the fact that she was her own agent, exciting, strong and sleek. A duet later was both poignant and intensely sexy: I loved Hades turning the ends of the silks to set Persephone into a spin, her spectacular drops that reflected the lurches of love, how Hades was able to slip above her and make use of a novel foot-loop at the top of the silks to twist and turn, and I enjoyed the thrill of the acrobatic catches that indicated total surrender and trust. Their relationship appeared as though through a glass darkly, lovers no longer in the land of the living, but rather revenants of passion. Persephone's finale in a flaming hoop showed her mettle, an inner steel forged in the fires of hell, climaxing in a spinning toe hang (high above a concrete floor) that had my friend and I grabbing onto each other, thrilled and terrified in equal measure.


The Girl is dead. The Queen reigns supreme. And a triumphant smile owned that she knows it.

Becoming Shades spoke to all those who have loved, and lost, and endure, taking its cue from James Joyce's The Dead: "Better pass boldly into that other world, in the full glory of some passion, than fade and wither dismally with age." Wise words. Don't look back.