"This is a historic occasion. We haven't seen jugglers at the Cockpit Theatre for 17 years!" declared Ringmaster Dave, Artistic Director of The Cockpit theatre, in Marylebone, in a tone that had a twinkle of a challenge to the opening act as much as a welcome. It was the first circus scratch night Circus in the Pound (see blogpost Chapter 163 - click here), so named as the entry fee is only a quid into the traffic cone at the entrance. The act being introduced was a work in progress between Gandini Juggling's José Triguero and Chris Patfield, and juggling is now back centre stsge at The Cockpit  with artist Robin Boon Dale, this time as part of VOILA! EUROPE 2017, the non-Brexit fearing theatre festival that busts the barriers of language, and showcases plays from around Europe and the UK to the multi-national audiences of London: see www.voilaeuropefestival.com - click here. As a Brit who has just sailed under a Swiss flag down from France, via Spain and Portugal, and is currently moored in Las Palmas on a pontoon with Swedish, Danish, Dutch and German families, I am very much there in spirit with a festival that brings together such a Euro-Vision.

The festival is the brainchild of Sharlit Deyzac, who has been touring the acclaimed Boys Club with Leonor Lemee as part of Two Tongue Theatre (see blogpost - click here), that came to Jacksons Lane Postcards Festival this summer. VOILA! EUROPE has a cracking line up of provocative, hilarious, life-enhancing, boundary challenging shows running until Saturday 18 November. And this year the programme has a touch of circus thanks to the presence of Robin Boon Dale and his show What Does Stuff Do?

Circomedia graduate Robin was one of a trio of artists in the excellent bar flair act Shakedown that I heard about earlier this year thanks to Kate Hartoch, organiser with Lina Frank of Circus City, Bristol's Biennial Circus Festival that took place to great acclaim this October (check out the photogallery for starters: www.bristolcircuscity.com/gallery and www.circusdiaries.com for reportage). Robin told me his show is the extension of an ongoing research project entitled "Is Juggling Liquid?" which explores ideas about creative notation and object oriented philosophy through circus skills and I'm intrigued by the description of this new show which has already won the ACT festival prize this summer and just returned from tour in Spain as part of the "Best of BE Festival": 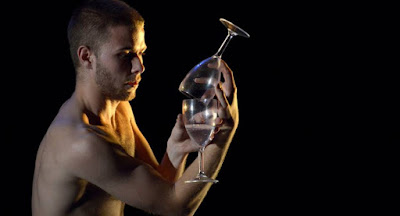 In his charmingly rhetorical debut show, Robin Dale utilises innovative juggling, physical comedy, and almost-philosophy to guide you through his mind and body of research.
What Does Stuff Do? is a lecture style performance in which Robin strives to understand the ever-unfolding relationships between people and stuff, and to help fill in the space between art and science.
Featuring an assortment of unexpected props and a motivational speech delivered by a man in swimming trunks. Please, bracket for the next 30 minutes any scepticism about the value of the totally obvious.
What Does Stuff Do? is on Thursday, 16 November 2017 8.30pm.
Tickets here: http://thecockpit.org.uk/show/what_does_stuff_do
Find @RobinBoonDale on Twitter, Instagram and Facebook Page.
VOILA! EUROPE festival runs until Saturday, 18 November at several venues: The Cockpit, Etcetera and Applecart Arts. Check out the shows www.voilaeuropefestival.com/work

Posted by LucyLovesCircus at 02:26 No comments: