Race Horse Company is a Finnish circus troupe, currently on tour with their surreal smash hit Super Sunday which I saw last year at The Roundhouse as part of a Finnish showcase in London (see post Chapter 139 - click here). Recreating all the fun of the fair, with bodies and giant teddy bears launching into space, and the nerve-wrecking wheel of death, it was an adrenalin-pumping rollercoaster ride for the audience as much as the performers. So when I heard that the company was bringing Around, a show designed for children, to Jacksons Lane for its London debut, I couldn't wait to take mine along and share the experience.

This time round the setting of the fair was swapped for a Big Top, complete with live band and animals. There were four performers in all, two musicians and two circus artists, though due to the variety of acts it felt like many more. On centre stage a monkey took the spotlight, strumming away on his guitar. From there things went bananas as the show followed the circus artists through a series of spectacles. A caravan of hobby horses brought a couple of acrobats in the ring, which had me laughing on a couple of counts. First in the way it was creatively done. And secondly because it reminded me that hobby horses across the Nordic countries are a bit of a thing right now, reading just the week before about the bona fide Hobby Horse Championships hosted in Helsinki this year (Race Horse Company, hello?!).

From there we were treated to a zany and gentle whirligig of incredible skill, mixed with a bonkers humour, that kept us utterly captivated. Kalle Lehto is a great physical comedian, whether as the charismatic and engaging ringmaster or the crazy frog man plunging head first into all manner of chaos. Susanna Liinamaa's serpentine contortions snaking out of a chest mesmerised my youngest as much as the hula-hoops that she spun later "as fast as wheels on a motorway, Mum". I loved the magic of the bubbles Susanna sculpted within bubbles that spun like a merry-go-round inside. To have Sami Tammela and Ben Rogers' bespoke musical score the whole way through was a real treat, and on a quirky note I enjoyed the cameos involving a musical saw and a set of pan flutes. There was sick breakdancing, uber-smooth ball and club juggling flow and plenty of general monkeying "Around". All this in 45 minutes. The mind boggles, right? The show is a real gem and part of a whole new wave of Finnish contemporary circus over increasingly in the UK that is conceptually innovative and technically excellent. Here's to more. Kippis!

Super Sunday is on tour until 3 June with Crying Out Loud, moving on next week to Salford, Norwich, Coventry, Derby and Huddersfield:
www.cryingoutloud.org/projects/rhc-super-sunday-tour-2017 (click here).

Chapter 183: Compagnie XY: It's Not Yet Midnight

Compagnie XY is at The Roundhouse at the moment and their show It's not yet midnight... is not to be missed. The company was last here seven years ago, with their previous show "Le Grand C", and since then has grown and now comprises 22-strong (and fit!) French acrobats whose collective philosophy - "On my own I'm faster, together we go further" - underpins their core strength. There was a real sense that operating on such a large scale opens up physical language into all sorts of interesting articulations and possibilities and I love that solidarity which brings a positive, generous energy to a world that, quite frankly, is in dire need of it right now. It also makes for a visually striking spectacle.

I saw the show last night and found myself flanked by theatre critics. It was press night, after all. Dutifully getting out my notebook too, I jotted down a few points, barely legible in the light of day, but my pen kept dropping along with my jaw, and the black ink made more of a mark on my jeans than on the page. Leafing through the notes now, I smile to see "Bloody Hell!!!" somersaulting across the page, and it brings it all back: courageous, talented, surprising, totally mesmerising, you just never know what crazy thing is round the corner with these guys. Launching like rockets from a teeterboard onto the shoulders of another, flipping on a wooden square, held aloft by others, with such ease and grace you'd have thought it were a trampoline, head to head balancing on a human table, a clown of a pony-trot across the stage... I just kept wondering, whatever next?!

There was a metropolis feel to the production both in terms of the neutral colours of the shirts, trousers, and odd pair of braces, and the architectures created by bodies in formations. A human tree falling timber into a sea of hands... and then rising up again. A roundhouse of 11 sets of performers two-high. Towers four-high showcasing the phenomenal strength and balance not just of XY but XX in the company too. The muted tones and minimal use of props also meant that attention was squarely focussed on the performers themselves. The lighting was simple - at one point the house lights were raised for an act as though turning the tables on the audience. The music was great: I enjoyed the strains of violin accompanying the tension, the uplifting lindy hop that got toes tapping, and the moments that required no soundscape at all other than the rhythm and beat of the bodies themselves.

The performers pushed themselves, and each other, to their limits, and beyond, which was thrilling to watch. Whether fighting, embracing, balancing, throwing or tumbling, with an accent (a sexy Gallic one at that!) on risk, they truly are ceroc 'n roll stars of circus, and infectious with it. So beg, borrow, steal, or, better yet, BUY A TICKET! They are here at The Roundhouse until 23 April (click here), catch them while you can. And then again. ENCORE!

Film credit: Remy Archer for The Roundhouse (click here)
Posted by LucyLovesCircus at 06:12 No comments:


If anyone has kids at a loose end on Easter holidays, my top tip right now is to catch Tweedy at Jacksons Lane in Highgate while you can. That said, there were plenty of adults there this afternoon without children in tow, for whether you are 3 or 103, the appeal of slapstick is timeless. I have seen Tweedy clowning around in Big Tops several times now, both as part of Giffords Circus (click here for post) and Cirque Beserk "circus for grown ups" (click here for post). I love the fact he has a sense of humour as gentle as his Scottish burr, and a pet iron called Keith: he just makes me laugh! Still, as much as a draw his name is, his function as a Big Top clown is to provide linkage and continuity between acts, covering changes in rigging and performers. Here at Jacksons Lane, a platform for contemporary circus, he was to take centre stage for an entire show. How would that work?

Simply brilliantly is the short answer. Tweedy took classic gags, some of which will be familiar if you have seen him before, and wove them into a story with a kafkaesque ridiculousness to it, as caretaker in a lost property office, never quite reaching the phone in time and going round in circles. Through the magic of Tweedy's clowning, inanimate objects took on a life of their own and he was very, very funny. Tweedy took clowning tropes and props, like the signature bowler hat, and gave them his own twist, like his quiff of red hair at the front. He is the reassuring rebuff to such declarations that "They don't make them like that any more!" Oh yes they do. 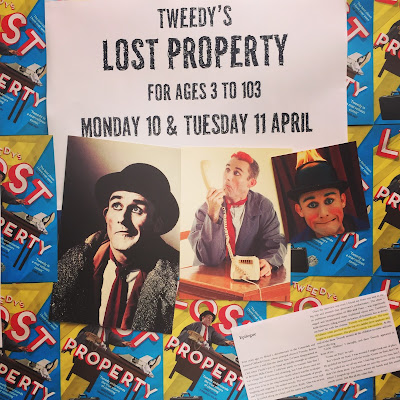 I went with four children in tow ranging from 5 to 11. Three of mine, who adore Tweedy already, and a friend of theirs who had never seen him in action before and had no clue what to expect. We certainly didn't expect a show long enough to warrant an interval, but there was never a dull or restless moment. As ever, cutting it fine from the trek up from South London, we arrived in the nick of time, and sat down at the front in an empty row. Of course, by rights that is asking for it, but fear not - Tweedy is an old hand in sizing up the audience and while there was some participation for sure, he made fun with, rather than fun of, those who chose to interact. It was a sheer joy to see old school slapstick and astonishing tricks so close up. Some tricks, like the dives and certain balancing acts, impressed because of the element of physical risk involved, while others, like the cigar box juggling, impressed through the sheer beauty of the skill. The kids were laughing the whole way through and were reluctant afterwards to pinpoint any favourite moment as "it was all funny Mum". I agree. Still, I had a soft spot for the scene where Tweedy donned red shoes that got his toes tapping, only to have them reclaimed while he was in his element, having fun. The shoes made me think of Moira Shearer's poignant classic (ballet) turn and clown boots rolled into one. Meanwhile the highlights for the older boys included the ladder routine and juggling precariously on a lethal rolla-bolla, while my 8 year old thought the best bit was when a violin bow was threaded through Tweedy's tongue (ew!). Meanwhile my youngest waved at Tweedy and thumbed at me when he was looking for volunteers, and it made her day to see Mummy then pulled up on stage too doing... well, find out for yourself!

Tweedy's Lost Property is showing at Jacksons Lane  tomorrow, Tuesday 11 April at 11am and 3pm www.jacksonslane.org.uk (click here) and then has a few more dates on tour, see www.tweedyswebsite.com (click here).
Posted by LucyLovesCircus at 14:05 No comments: