Staying home, living day by dayMay be safe, but it can't be duller.Seeing things only black and grayWhen the world is alive with color.Doing just as your neighbors doMay be wise, but it ain't so clever.Every man has a dream or twoLet 'em go and they're gone forever.

"Out There" Barnum, the Musical

At the end of Coronet Road in East London there is a square where an old electrical light station generates a new sort of energy.   A ring, a circlet, a circus space. The building is home to Circus Space, which was in the process of rebranding as the National Centre for Circus Arts - a more functional title, ah well.

On Saturday 8th March, 2014, a dozen of us, all girls, gathered outside ready (or not) for a  "Circus Experience" afternoon, where we would try our hand at flying trapeze, tight-rope, acrobalance and juggling. Nominally in honour of my birthday, but any excuse quite frankly. Actually it happened to be International Women's Day, and we were an assortment of nationalities.  There were friends from home, school, university, friends made locally through the kids, none from my accountancy days bar one male friend who had expressed an interest, then rapidly back-tracked when he discovered the ratio.  Not like him to turn down a hareem, but probably a wise move.


We signed in only to discover there was an additional form to fill in that day.  A disclosure agreement.  The BBC were in filming for the afternoon as part of BBC Two's The Travel Show.  The fact that no-one at this point turned round and ran for the hills I think demonstrates the courage of these ladies.  We swallowed hard and carried on to the locker room.

We arrived with everyone else in the main hall where ropes and silks hung from the celing, a flying trapeze set up at one end. After a couple of fun, and competitive!, warm-up games we split into four groups and rotated around the activities on offer.

Juggling with Stefano was probably the weakest link for us all in terms of co-ordination.  Tightrope with Amy was a surprise -  the wire was so thick and easy to grip for starters. The star in our group was actually a giant of a guy who was as nimble and fleet of foot on the wire as a ten year old.  In no time at all he was doing the whole wire backwards.  Turns out it really was child's play for him. He credited his prowess to a "mis-spent" youth climbing trees and balancing on branches.  With a slight pang, I had visions of Swallows and Amazons, of treehouses and dam-building, and wondered if it wasn't time to move the kids out to the country-side.


Acrobalance was an exercise in trust and working together.  Our instructor Kaveh was a ball of energy and fun, with the most indecently well-developed arm muscles its ever been my pleasure to grip.  In no time at all we were putting feet on thighs, bellies on feet, hands on shoulders and building human pyramids. 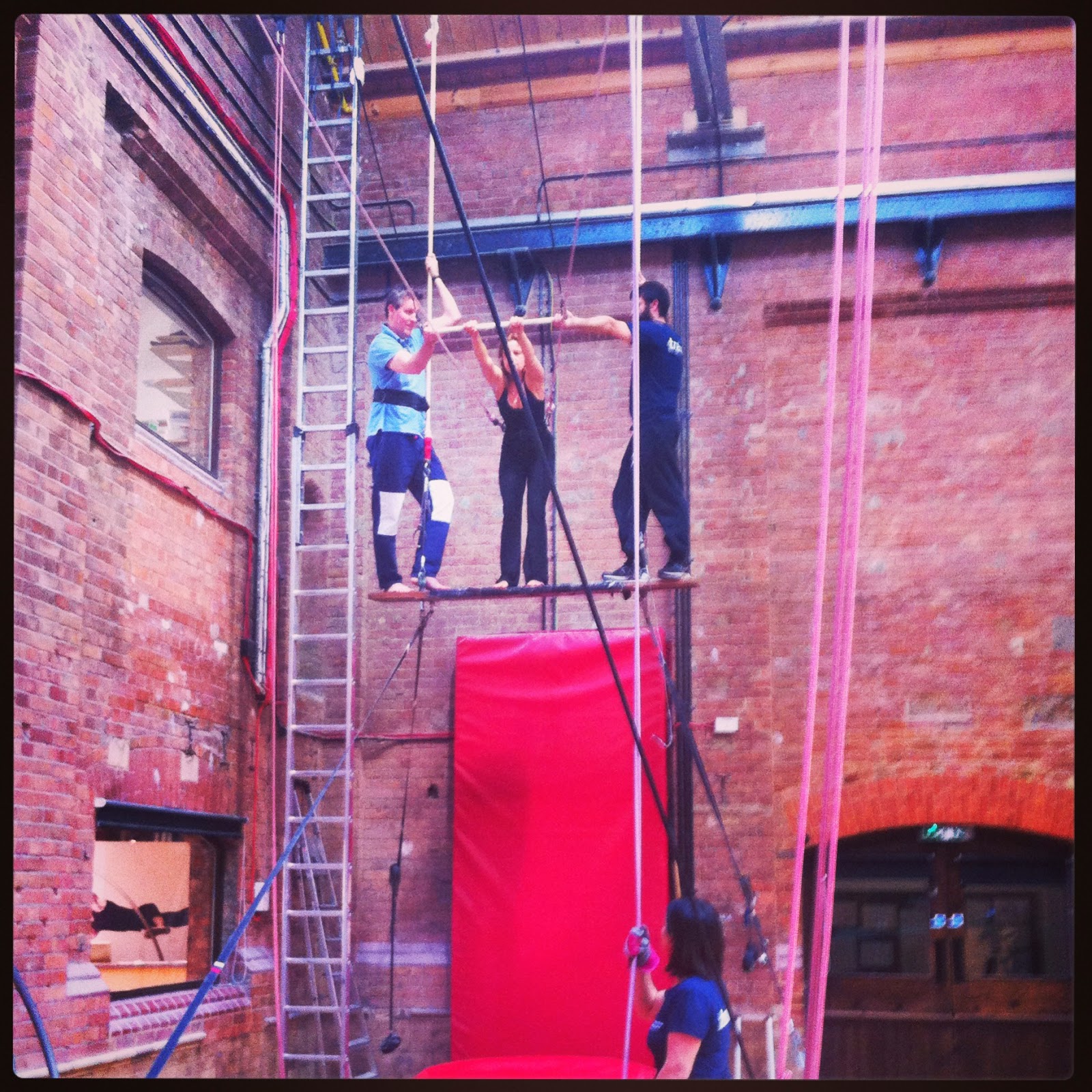 When it came to trapeze, Leila our instructor explained the procedure simply and reassuringly. Standing at the top of the platform holding the bar, you don't jump off, you simply stretch out one foot, while the supporting leg bends,  "then, as though you are dipping your toe into a swimming pool, just let the momentum carry you forward". Glide don't jerk. Gallows sprang to mind.   When it is your turn, your brain will probably refuse to compute there is a safety line, held by the instructor, attached to the back of your harness.   No idea knows how the friends with vertigo managed.  But they did.

To get moving, in my case, I focussed on the platform assistant Max. Max, Max, I have a nephew called Max. Where do you come from Max?  Barcelona.  Anda, muy bien, mol bé!  I used to live in Valencia.  Mind if I sing you the Valencian football anthem, Max?  I'm "brava" in Spanish. No, please go ahead.   Surprised he didn't shove me off the platform. Maybe he did. Moments later, anyway, I was flying, trying to listen to orders: Pike, legs back, up, up, UP, back pike, PIKE!  Sheer joy. 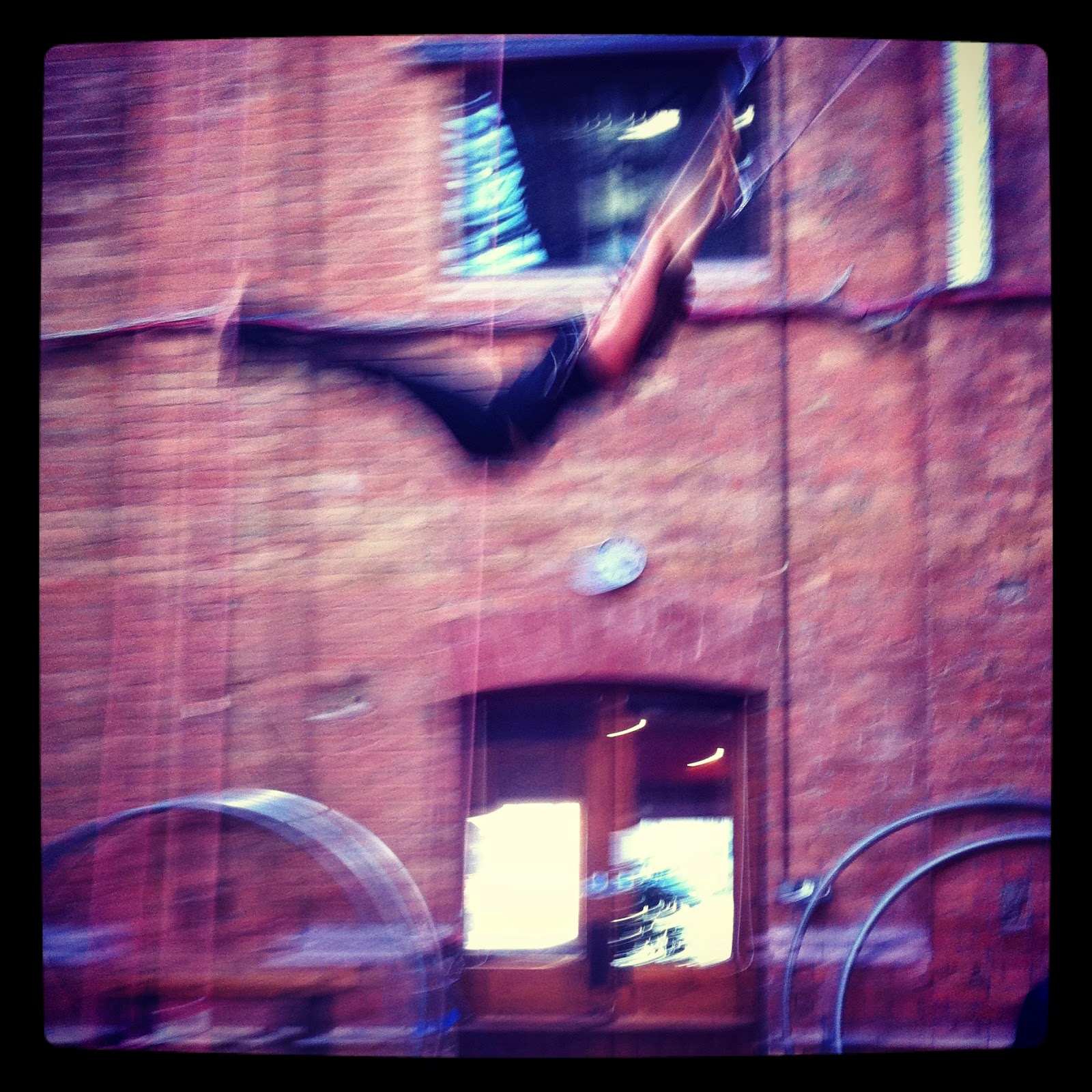 Afterwards, we partied like Gatsby, slipping into our glad-rags with a 20s twist, heading to the Prohibition-styled Nightjar.  There the Yorkshire Punch and dry ice flowed out of the mouths of bronze owls onto chai teabags, steeping in vintage teacups, garnished with sprigs of lemon thyme.   The night was young, we felt.

It occurs to me now that writing a blog is a bit like your first go on a trapeze.   You feel as though you are about to fall flat on your face. Having friends at your side is a huge support, though sometimes it helps to pretend no-one is watching, while at others, imagining an audience makes you braver, but at the end of the day you simply have to dip your toe in and let the momentum carry you forward.

(Tightrope starts around 8 minutes in)
Posted by LucyLovesCircus at 16:11