Chapter 47: Circus skills are good for the kids - scout's honour!

I love a cheeky pun, so the page 3 headline in the newspaper was always going to catch my eye. Only we're talking The Times, not The Sun.

"Were you ever a Scout? I'm a frayed knot" 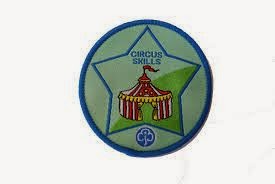 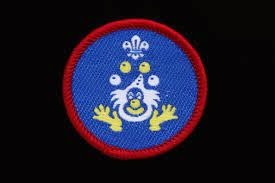 Well, boom, boom! I read on. The article registered outrage among certain quarters about the decline of traditional "relevant" skills like knot-tying in the scouts association, and by extension the girl guides, in favour of new activity skills badges "covering areas such as youth work, circus skills [...] and street sports such as skateboarding". Children's author GP Taylor declared: "This just shows what a pathetic society we are becoming. Baden-Powell will be spinning in his grave. He would be outraged by this."

While I agree there is often pathos involved in clowning around, it's surely wrong to write off circus skills, and the like, as pathetic. The circus skills I've come across require courage, trust, focus and hard graft, and you even learn how to tie knots (with your feet, on the rope, if you're lucky!). They also require physical stamina, core strength, and, dare I say it, mindfulness, something that competitive team sports at school don't really develop.

Then, that evening I stumbled across one of the most engaging and inspirational TED talkers it's ever been my joy to watch. The talk was given by tightrope legend Philippe Petit, subject of the Oscar-winning documentary "Man on a Wire", and had been shared by Airborne Circus the same evening that Nik Wallenda was crossing blindfolded between towers in Chicago, buffeted by winds of up to 25 m.p.h.

As Petit was describing his adventurous childhood he struck me as a regular Boys' Own hero, encapsulating the spirit of Baden-Powell's own rhetoric: “Where is there a boy to whom the call of the wild and the open road does not appeal?"  Petit progressed from magic tricks aged 6, to juggling and then to the high wire as a teen, thanks to an enterprising, curious spirit.  And it is this coupling of common-sense and ingenuity that is be the badge of honour of any true scout.  You should hear for yourself how he constructed his very first tightrope:

Baden-Powell considered that fun and games had an intrinsic moral value to them, and I am sure from that stand-point as well he would thoroughly appreciate the final story in the TED talk, where Petit describes how the stringing a tightrope between Israel and Palestine built a bridge in more ways than one.

So if Baden-Powell really is "spinning" I'm sure he's just showing off a few new-found circus tricks beyond the grave. Heaven, really.
Posted by LucyLovesCircus at 05:48