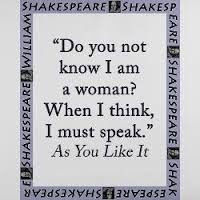 Last night I was back at the Edinburgh Fringe, watching a show called "Robbed of Sleep" in which half a dozen clowns hijacked a lorry, then turned their guns on the audience, shooting out ribbons, party poppers and festival banners. The oldest trick in the book, and we laughed. It was a dream, obviously, and I don't need my subconscious to warn me that circus is stealing all my time. But right now so much is happening, I must speak. 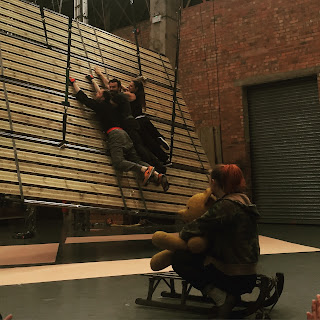 Oxford was on my radar last week. Keziah Serrau has just taken STRIKE! up to the Oxford Playhouse. Unfamiliar with the work, I had seen Serrau's heart-stopping use of a suspended wooden platform, hanging either horizontally or sliding to vertical depending on the balance of performers, at a presentation at the National Circus for Canvas 2015 (pictured left - for more about Canvas click here) and would love to see this production:

"STRIKE! is directed by rising star Keziah Serreau and devised by highly skilled performers using innovative aerial structures, lively humour and a Kafka-esque setting to blur boundaries between circus and theatre. Expect daredevil stunts with a fiery tale of uprising as the cast of five play office workers, buried (quite literally) under an ever-increasing workload. But when they decide they aren’t going to take it anymore, they bend rules- and their bodies- to escape."   See the Oxford Mail - Curtain Raisers, and the BBC Radio Oxford interview (click here) which is available til 1st October.
I emailed friends in Oxford immediately, only to be told, "actually we are at the Playhouse already on Wednesday, the night before, to see some sort of cross between juggling and ballet". Aha! I thought, Gandini Juggling must be up in town too, with Ephemeral Architectures (Chapter 59 - click here). The friends contacted me later to say how much they had been impressed by the sheer athleticism of the choreography and the beautiful music. So close, but narrowly missing them, I went to Oxford myself on Friday night, with my husband to his alma mater Lady Margaret Hall, for a promenade production of As You Like It* (pictured right) through the college gardens. Set in occupied France, I caught a glimpse of circus in a ring, albeit a wrestling tumble, an onion-juggling Touchstone and some stellar clowning. It's on until 12th September, and well worth the journey.

While travelling up to Oxford, browsing circus channels, I came across a video of Lyn Gardner in conversation with young critics and bloggers**. Find your niche, she advised them, find something that no-one else is writing about, and name-checked Kate Kavanagh, of The Circus Diaries. It was terrific to hear that recognition for both Kate's work and her platform. Here are two writers at the vangard of circus criticism, one a journalist, the other a blogger, and reviewer for on-line periodicals. To point out that they are women could be taken as a sexist observation. What does gender matter in the job they do? Well, hugely for me. Maybe because seeing the clip was so closely followed by a performance of the gender-bending As You Like It at a college that was formerly all-women, reminding me of my own all-female college in Cambridge (New Hall, now Murray Edwards - see Chapter 43: Cambridge Circus - click here). Both colleges seek to redress an inherent, institutionalised sexism in society, that is still rife. It may not come as a surprise to hear that I came across Sexism in the City: the lads invited to strippers clubs on "bonding" evenings with managers, secret pay grades, partners asking why you don't sleep your way to the top. But I have seen discrimination at work in academia as well, and heard Jude Kelly, director of the Southbank Centre, talk about it in the Arts - read her here marking Women of the World Festival.  And yet, despite being warned of the "jocks and jerks" around, I find the community of circus pretty egalitarian and I wonder if growing out of the margins of society, and still, to a certain extent, on the fringes, accounts for its inclusivity? There is a discussion there, waiting to happen.

And happen it will on 14th October in Bristol. Ausform, in partnership with Circomedia, as part of the Bristol Circus City Festival (see www.bristolcircuscity.com) is hosting VOLT: Women in Circus. An evening that begins at 7.30pm, it will host a discussion on women in circus and a double-bill of work in progress performances from Maddie McGowan and Grania Pickard, the descriptions below taken direct from the website: VOLT: Women in Circus (click here)

"He Ain't Heavy from Grania Pickard (see project video below***) depicts an autobiographical narrative using a swinging trapeze and a puppet to give you an insight into Grania's relationship with her autistic brother. After an intensive month of research and development this will be the first showing of this exciting new work at Volt. This process has sparked a burgeoning collaboration with Alexander Hamilton-Ayres who has composed an original soundtrack for the piece. Grania hopes to raise awareness about families caring for a loved one with autism or special needs by sharing her own experiences with you. In his own words, her brother is both a 'rat bag' and 'the best.'

Grandma's Hands from Maddie McGowan:
“Two people, at the start and at the end of their lives,
bonded through blood...”
The relationship between grandparents and grandchildren can be tender, delicate, and funny, its significance changing with time. Through aerial rope, text, movement and recorded conversations, Grandma’s Hands explores themes of biological inheritance, ageing, and what we can learn from each other across generations."

On Twitter at the weekend @Ausform invited suggestions as to whom should be on the panel for the evening. Were they talking circus artists, producers, programmers, promoters, writers, directors? I wondered out loud. A whole flurry of names immediately sprang to mind, and I have only been moving in circus circles for a year. That is incredibly encouraging. Fresh from my first ever 10k run round Kew Gardens (the Richmond Running Fest) with half a dozen girlfriends yesterday, I am in the zone for celebrating women supporting women. I think of the girlfriends who came to a circus experience afternoon at National Circus, and my fabulous friend Anne who signed up, with me, to evening classes there on the back of it (see Chapters 1, 2 and 3 - click here). It's Anne's birthday today, happy days! And I give thanks for the men who support us. So here's to momentum, moving forward and celebrating, circus style.

*Creation Theatre's As You Like It is on in the gardens of Lady Margaret Hall until 12th September.
Click here: www.creationtheatre.co.uk

** Lyn Gardner on Blogging and Theatre to Young Critics

***Grania Pickard is looking for support. See this project video for He Ain't Heavy