Chapter 106: Self Censorship and The State of Mind 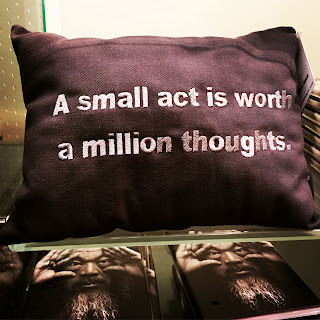 "A small act is worth a million thoughts."
Ai Weiwei


One of the things I took a way from the exhibition of Ai Weiwei at the Royal Academy is that all of us have far more power than we realise to speak up and be heard. This in the week that I heard from a friend, over from Beijing, all about the precautions preparations for the military march in honour of the victory over Japan in WW2. A city in lock-down, policemen stationed inside residential apartments that might overlook the parade, internet black-outs for 48 hours, all tightly controlled. Not unfamiliar to me from time spent in Cuba. It would never happen in the UK, would it? And then I think to the time my husband walked into a pub in the City with a biker's helmet. A policeman clocked him, and had the street camera outside trained on the exit, and monitored, so as to notify him when my husband was leaving that pub. An hour or so later my husband got on his bike, was flagged down within 20 yards, and breathalysed. Prevention or entrapment? Luckily for my husband he is super-Swiss and safety conscious - he had only been on the orange juice, was not remotely defensive and that's how, chatting to the policeman, he got the full story.

As our civil rights are being eroded, I have always believed that, short of going off the grid, the only recourse an individual has to privacy is through anonymity, being a person of no interest.  But if you do that, you silence your voice and are in danger of never speaking up. I look around and see many people have already found their voice, clearly comfortable with who they are and their right to speak.  For others, like me, it’s a work in progress. So it was providential this week when I received a message that a place had become available for a one-off improv workshop. I snapped it up immediately, albeit with some trepidation after my foray last year into the field of improv with Julia & Jorge, a couple of Argentine clowns (see post on The School of Hard Knocks - click here).

That afternoon, beforehand, I travelled up to Jacksons Lane to see the last of the sharing of work in progress as part of  “Transmission”.  Watching the superb skill of Michaela O’Connor, Victoria Mcmanus and Aurélie Bernard on trapeze, as well as enjoying the physical comedy and dynamic between them, was heart-warming. They were telling the story of Hattie, the girl who never goes out of her flat, and, in Walter Mitty style, fantasises about the life her neighbours lead, until one day she ventures out herself. Well, of course, for a stay at home mother of three running off to the circus, that was always going to strike a chord. But also, having this impending workshop at the back of my mind, I was watching the natural and spontaneous way the performers responded in the Q&A session afterwards. I was looking for tips. “Just have fun, don’t be scared and be yourself. Break the rules, oh, and did I say have fun!” came the advice from Sean Kempton over Twitter, performer, clown, comedian, director, and the voiceover in Hattie. And I took those words to heart.

The workshop in the evening was led by Max and Sophie from Hoopla - see www.hooplaimpro.com - a company that provides comedy courses, classes and shows, who facilitated the evening with spontaneous humour and practiced skill. As for the other participants I didn’t know a single person there and that didn’t matter remotely. Maybe it even helped. Basically, we spent the whole evening playing silly games, breaking our own rules of self-preservation and laughing, in a way that moved from being embarrassing to deeply relaxing,  rather like yoga but with baggier clothes. And, just as in yoga, it felt like a switch flicked and a whole surge of energy rushed through. It's true what they say, you can't feel fear when you are having fun, and the moment you stop censoring what you are going to say, your state of mind lifts its barriers. So I took the plunge today and asked to join a 3 day workshop in November with clown maestro Ira Seidenstein. But for now, I'm signing out to give Beverly Hills Cop my full attention. Detective Axel Foley is as funny and fresh as ever, and what he does with a banana, well, it's quite exhausting.

Note:
Hoopla run six week beginner improv courses and I was delighted to learn they run it out of Theatre Delicatessen, where I last saw Circumference’s "Shelter Me" (click here for post) and ended up running after a white rabbit. Curiouser, and ever curiouser ...

Thanks to Kate Kavanagh of The Circus Diaries for directing me to "No Boundaries" - the recent symposium on the role of arts and culture, particularly videos of international speakers (from Egypt, Turkey, Belarus) discussing freedom of expression and self-expression: www.nb2015.org
The whole site is worth checking out and is a superb resource, as is Kate's own Circus Diaries. Recognising the value of Kate's circus criticism, currently self-funded, you can also support her work at: www.patreon.com/thecircusdiaries (click here).