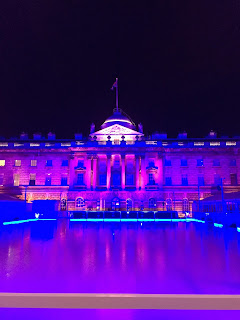 Exhilarating, funny, thrilling, mesmerising, Dance Umbrella  brought the quintet of Canadian skaters in Le Patin Libre to carve up the ice at Somerset House last week with the a fusion of graceful ballet and engaging street performance. Half an hour passed in a flash of light and shadow, choreographed to stunning urban soundscape of rich, atmospheric music, audible breath, and a shattering of crystal shards, bringing new definition to the idea of a "son et lumiere" spectacle.

Le Patin Libre had come onto my radar in the summer in the buzz of the Edinburgh Fringe, winning The Total Theatre and The Place award for contemporary dance, and I couldn't wait to take my husband, as he grew up in Switzerland doing winter sports, just like these guys. That was until disaster struck when we were Clowning on Ice (click here). So instead I went with one of my dearest friends, another hand-holding skate partner, and we met up there with my first ever ice guide Rosie, also a storyteller and performer (@RosieTellsTales) who was working on front of house. Somerset House floodlight in pink and purple was a sight to behold, a stunning frame for the frozen stage.

The first thing to note when Le Patin Libre return, and trust me, they must, is that you really do have to wrap up warm. Hats, scarves, gloves and a good couple of glasses of mulled wine in the green room café beside the rink should do the trick. The next is that the show is half an hour, so on one level, be prepared for it to go at top speed (literally), but at the same time, such is the intense beauty and thrill of the spectacle that it also feels like time is suspended.
Le Patin Libre, free skate, has a certain vibe of urban skateboarders on ice, a group that celebrates its diversity, in all shapes and sizes, a complete antithesis to the sequinned and permatan uniformity that the concept of Dancing on Ice conjures up. I liked the outfits of the skaters, casually co-ordinated in stone, slate, and mustard, which highlighted the natural harmony between them. I thought it was important too that there was a female skater, not overtly sexualised but bringing a feminine power and strength, that brought balance to the make-up of the group.

As with all things, I find circus everywhere, so when they raced towards us at speed, stopping at the last moment and playing with our nerves, it reminded me of the opening scene that morning I had seen in a trailer to the French film Chocolat, where the self-styled "black clown" toys with the conventional expectations of the audience. And it's funny, because the London International Mime Festival is in full swing at the moment, and there were elements in certain solo turns that I could also see extended into full-blown mime stand-alone pieces.

They are all championship skaters, "gliding enthusiasts and weirdos" as founder Alexandre Hammel describes them (click here), but it was interesting to note that one was wearing a pair of ice hockey skates, while the rest were wearing figure skates, which affects certain movements, I understand. They belonged to Jasmin, who came to free skating, incredibly, only about four years ago (makes me think of the prodigy in the "The Mighty Ducks" - name me a pro-skater who didn't see that film as a child! I watched it with the kids at Christmas...), while the others are figure skaters by training. This is why at one point Jasmin sits out on a piece of group choreography, and it was a brave decision to have him seated on the side of the rink, so much in the fore, in an end piece, because for a split second I wondered if he had been injured. So slickly done, he clearly wasn't, but I appreciated the explanation later from Rosie as to why. It was Jasmin, as well, who composed the stunning music score. I wish I had enough skating knowledge to explain how and why the "s" figures, twists, jumps and balances were so exquisite, but all I can say was that the vertiginous acrobatics held me in rapt attention from start to finish. And I laughed so much as well, I hadn't expected that.

Afterwards, the skaters first concern was for the audience and whether we were warm enough, and yet they were the ones shivering away but standing out afterwards meeting us and saying hello. So, back in Montreal now, thank you Pascale, Alex, Samory, Taylor and Jasmin, it was a joy so see you in action, finally - chapeau! A la prochaine...

Note: Chocolat stars Omar Sy and James Thiérrée and is officially released in February. It is based on the true story of iconic clown duo Footit & Chocolat, the latter an ex-slave from Havana, a history I kow well, given the years I spent studying Cuban theatre and el teatro bufo. Omar Sy is best known for "The Intouchables", and James Thiérrée is the son of Victoria Thiérrée, who makes an appearance in Fellini's "I Clowns", herself in turn the daughter of Charlie Chaplin. They do not trade at all on the Chaplin legacy, but there is little doubt they inherited the gene. And it's funny too, speaking of Chaplin and skating, because I had tweeted Le Patin Libre this extract from his film "The Rink" which made them laugh too:

There have been pre-release parties in celebration, footage of which I spent last night retweeting - check out Arts on Mouvement @CIAM_aix #ChocolatLeFilm on Twitter and Instagram. I am looking forward to seeing the film when it hits the UK,  and making plans already to see it with the group I'll be doing the clown acting workshop with in February (see bottom of post on Marcel click here). Who else?! If nothing else, check out the stunning trailer - no English subtitles, but am sure you'll get the gist: