It is tipping it down in more ways than one today. The rain caused a pile up of traffic, jams on every short cut imaginable, aggressive drivers without any give, I am grumpy and emotional because I ran out of time for breakfast, knackered after yet another interrupted night with my youngest, frustrated by a lack of space to write up several blog posts on the go (thinking of Kate Kavanagh of "The Circus Diaries" the other day saying to me "we need a bloggers anonymous helpline!"), overwhelmed by a backlog of admin, and fed up that yet another school demand means I'm missing my "safety valve" of an aerial silks class.

None of these things are big deals in themselves, it's what I've signed up to after all, but they mount up. There are days for us all when nothing goes right. When it takes a superhuman effort to rise about the relentless demands of everyday life and the pace of urban living. Maybe that's the attraction of circus training. Learning to do the impossible (when I can make class!) is like a two fingers up at the daily grind. So it was great to see last week If I Could I Would from female acrobatic company Mimbre, which follows a day in the life of a woman, whose special powers get her through all manner of ordinary obstacles in everyday situations with which we can all identify. I saw the show in rehearsal last Friday at The Hive in Hackney Wick. The irony that this was where I normally have an aerial silks class, my own bid to supersize my bird muscles and fly, was not lost on me! 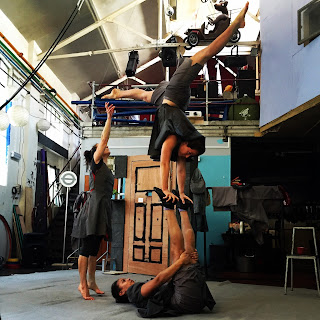 All three performers were dressed in muted grey, but there was a flash of red in our superhero's costume to suggest that there is more to her than meets the eye, and that became more and more visible as the show progressed. As she flipped onto the scene thanks to the innovative set design (no spoilers!) and navigated her way through the crush on the daily commute, and into work, we met a whole host of characters: a distracted old granny holding up the queue, gossipy co-workers sharing an exclusive in-joke, a Horrible Boss, who gives Colin Farrell a run for his money, and leering lads. They were all familiar types, instantly recognisable and hilarious thanks to the brilliant use of physical comedy and superbly choreographed acrobatics. While I loved the shapes made, whether using the body as a skipping rope or to build a dynamic three-high human tower, it was the acting as much as the circus tricks that impressed. Male or female, young or old, they nailed it, and there were some pretty quick changes to juggle as well.


As the frustrations built up and up, our superhero took a running jump and started to fly. There was a darkly menacing moment that put her in jeopardy, but our protagonist fought back, turned the tables, and the scene shifted gear into a brilliant comedy that was one of the highlights of the piece. I read the ending as a heart-warming testimony to female resilience, emotional as much as physical, and to the efforts of all the super women out there supporting each other. It is a show that makes you wonder "if I could, I would..." but also leaves you with the challenge "well, why don't you then?!"

If I Could I Would is an outdoor show, currently on tour and will be the Greenwich and Dockland International Festival 25-26 June (click here).