My husband gave us a his and hers DNA sampling set for Christmas (www.23andme.com). How romantic, I hear you say. Well, actually, it was. I love the fact that 16 years on, 13 of which married (our anniversary is today, actually), there is still more to learn about who we are, where we come from and what we share with our children. The results came back recently. From our saliva the labs could tell, for instance, what percentage of Neanderthal we are, confirming that despite being further up the evolutionary chain, I still went for the caveman. With a Scottish mother and Anglo-Irish father, having 88% British genes was no great surprise either. But I was fascinated to learn that the remaining part of me is part Scandinavian, part Ashkenazi Jew. I am a cultural magpie as well, picking up ideas and influences through mixing with others. Social media facilitates this now in a mind-boggling way. A quick look at my blog stats, for instance, reveals that right at this very minute I am being read, in India, Indonesia, Germany, France, Italy, Ukraine, Netherlands, US as well as the UK. Meanwhile over on Instagram I see snapshots from circus cultures all over the world, from Cambodia to Canada, from cutting edge contemporary circus experiments to life in the most old school of travelling big tops. 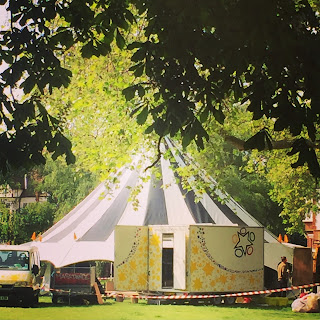 So it was both funny and fitting to find myself recently on a quintessentially English village green, under the awnings of a monochrome beauty of a circus tent called The Magpie, swapping notes about the album "England Take My Bones" with fellow Frank Turner (see previous post) fan, Cal. He and Tom are from the superb Head First Acrobats. They are currently touring with their show Elixir (click here), which I guess you could describe as an Australian Bromance with zombies. It received rave reviews at the Brighton Fringe and will be up at the Edinburgh Fringe this summer. I was also chatting to Gonzo, from Argentina, about life, the universe and the circus scene in France, and the world seemed very small. The Magpie is now a year old, the brainchild of Helen Averley and Steve Cousins of Let's Circus (click here). I fell for it the moment I saw Helen's magical sketches when the funding campaign was first set up. It sang to me of Barnum - "the future's rosy living black and white" - fun and adventure. I had been excited to hear that The Magpie was coming south for the Barnes Children's Literature Festival, and then disappointed to find we were away that weekend. So I half-jokingly volunteered my services as a roustabout, and they took me up on the offer. 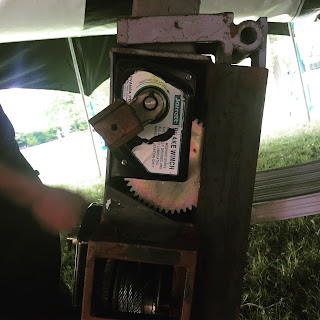 Teaching a complete novice what to do takes time, but they were very kind about it, even when I sidetracked the guys by asking how to crack the whip I found lying on the floor. After splicing my back in two initially, I learned how to hold it away from the body and unfurl the cord in a wave. Maybe it didn't make so much of a crack as a squeak, but still, it was very satisfying. We packed away bespoke benches of varying sizes first, slotting them into each other. Then we broke up the flooring, edges first, like a jigsaw puzzle, and piled up the slats in a trailer. That was the heavy part for me, and the reason I ached all over for several days afterwards. Deflagging the tops of the poles under Helen's instruction was easily done, as was dismantling the outer poles, while the central poles were winched down and the world gently deflated. The mechanics of it all was quite a sight. My favourite part though, was unlacing the sheets. There was something gratifyingly zen about the repetitive nature of the action. It was a little sad to see it all packed away. I wanted to go travelling too! The great thing is I will have the chance to see The Magpie again this summer, heading up to Northumberland with the family for Circus. In a Field! The week long event at the end of August offers circus enthusiasts the chance to do some serious training by day, camping under the stars by night. Obviously not everyone in my family is a circus enthusiast (!), but with beautiful beaches and kite-surfing opportunities round the corner we have a Plan B lined up for them. For more information see www.letscircus.com.

That day with The Magpie reminded me that nationhood and nationality are as much a state of mind as circus. While my genes may tell me I'm 88% British, my loyalties lie 100% with Europe. I was surprised therefore, taking a test recently that asked Are You In or Out? (click here), to discover that while I am staunchly in the Remain camp in terms of identity, society and the economy, I am not so convinced in terms of politics. But that merely reflected my ambivalence towards the powers that be in Brussels, and the quiz never asked what I thought about a Brexit alternative. For I am clear on this: a vote for Brexit is fundamentally a vote for Nigel Farage. A vote for racism, xenophobia, and a living hell. So I am staggered to see today the front page news that Brexit is in the lead. My heart breaks. And I think of Soho. That quarter of London that for centuries has been a refuge for foreigners and minorities, a vibrant and vital site of cultural interchanges and crossing boundaries. The place that, in the wake of heart-breaking atrocity, last night hosted the vigil in memory of those who died in Orlando, and chorussed together #lovewins. I still live in hope. We have a week left to change the world.