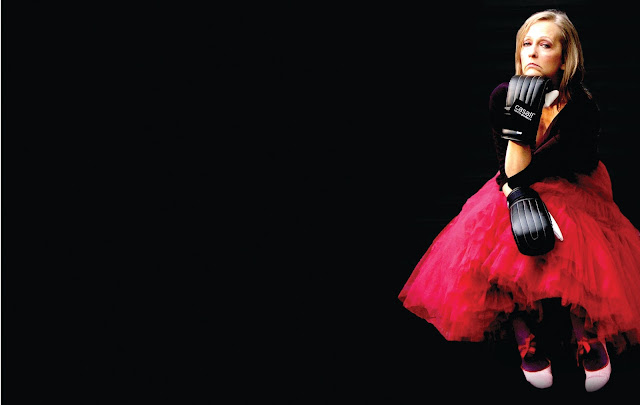 
"It's a delightful thing to think of perfection; but it's vastly more amusing to talk of errors and absurdities"
Fanny Burney in Camilla (1796)

In the recent wave of mass hysteria about creepy clown sightings, Tamara Palmer, spokesperson for Clowns Without Borders, an organisation that brings giggle doctors to children in crisis areas,  said "real clowns don't seek to mask their identities". What she was getting at, I believe, was that, red nose and greasepaint or no, the clown persona is an authentic articulation of a performer's inner truth. A clown for me is any performer who engages the audience through play, and if it doesn't ring true, the audience will just not connect. I had heard about Peta Lily's school of "dark clowning" from friends. While a red-nosed circus clown puts their vulnerability on display for laughs, tripping up and looking stupid, the audience is free to laugh safe in the knowledge they will bounce back. A dark clown reaches into a place vulnerability and stays there, serving it up in a way that that the audience still laughs, only no longer so innocent, rather complicit in the pain somehow, disconcerted, and ultimately challenged. Having signed up time and again for any experience that promises or risks the proverbial pie in the face (cue my audience with Ken Dodd: Chapter 128 - click here), that is a place I'm aiming for with my writing.

So I was holding out for Chastity Belt. In fact, I saw the show twice, first in extract in an evening of comedy sketches, and then the full version a few weeks later, both times at the Lion and Unicorn theatre pub in Kentish Town. What struck me both times was how much of a brilliant word-smith and belting singer, as well as mimic and clown, Peta Lily is. Words tumbled out in cascades of short, striking rhythms, puns and playfulness both gratifying and spell-binding as she conjured up a succession of spirited Greek goddesses, Hindu deities, amazons and archetypes who have all had to withhold to uphold their honour.

Peta in her crimson tutu and candy-striped shoes artfully toyed with the trope of a girlish ingenue, the coquettish flirtations and angling for a man, only to discard it along with the skirt to reveal a virginal white slip of Diana ("the goddess not the dead princess"). Peta, with her ash blond hair, high cheek-bones and piercing blue eyes, was the incarnation of Diana. She looked good for her age she heard us mentally qualify, and I winced. A fine and funny case is made for surrendering sex. The deliverance from the mess, emotional or otherwise, that comes from all the games, subterfuge, humping, grinding, pumping.  But not without acknowledging the loss that absence of intimacy entails - "no nestling... no spooning... no silken touch..." I felt my heart contract. Peta is no simple cheerleader for the cause of chastity.

Slipping a bowl up the back of her top, I loved Peta morphing into Diana the crone, the hag, queen of the sexual desert, the dromedary who is "quite happy having the hump".  I had a soft spot too for the banter of Lysistrata and her mate Trace in a poetic latter-day reimagining of Aristophanes' play in "The Only Way is No Sex". In the original, the wives deny their spouses' conjugal rights until a peace treaty is signed. Could it work today? Or would the call to arms (or closing of legs) by an older woman be nothing but a "grand empty gesture"; given her "great age" would anyone notice? And there's the rub. That is the blow landed below the belt. Is chastity a choice or a necessary protection, the only option to avoid the pain of finding out whether anyone cares? Serious questions were served up with humour and an innovative twist of lemon, sharp but not bitter, to keep the evening well-lubricated. I squirmed, I laughed, and, much to the amusement of Leonor sitting next to me, I punched the air ("I want a wife!"). Wickedly funny, full of zest, Peta Lily revealed herself to be chastity's agent provocateur for the evening, had us all right where she wanted and clamouring for more. 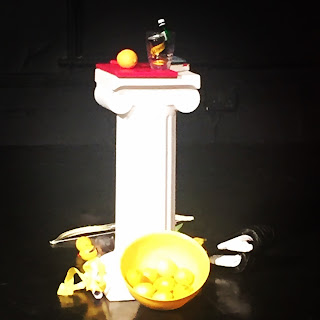 Oranges are not the only fruit

Chastity Belt is available as a book of poetry on Amazon. Click here.
Posted by LucyLovesCircus at 11:11