Right, so the other evening I went to the first ever Scratch Night at Flying Fantastic in Battersea (who also run classes in Farringdon), where students were showcasing their own routines on hoop, static trapeze, silks, and a touch of hula.

The event had come onto my radar as Flying Fantastic is fairly local to me and I was interested in seeing what was going on in the community. And WOW! These are not circus performers in training, but ordinary people using the space as a fitness class once a week and doing extraordinary things. Not that you'd know they are anything but circus professionals from the glitter and sequins, neon false eyelashes, silver bodysuits and spangled leggings flying around. And it was entirely appropriate that Kate, the MC for the evening, was resplendent in a ringmaster's outfit, while seeing rigging taken up and down between acts by a reindeer added a bit of festive cheer, and then some.

Everyone was clearly having fun and relishing the opportunity to show friends and family what they'd been working so hard on all year. Splits on silks, drops on trapeze, duets on hoops, a whirring rainbow of hulas from every extremity of the body. Interestingly, before the show started, Kate asked the audience who had seen any form of circus before. There was a minimal show of hands, but the collective gasps and riotous applause throughout the evening makes me think next year the balance will swing the other way.

It was great to hear as well that Flying Fantastic are all set to roll out classes for children in the New Year, so I went over to chat to the founders, Edel and Chris, afterwards. My own children still talk frequently about their holiday workshops with Adam at Airborne Circus, (and ask when they are going again!) but at an hour and a half away, it's just not possible regularly.

That is why I am so excited about a local community initiative, and If you need any further convincing of the benefits of circus skills for young people, click on the link below and listen to the inspiring Marcus Davey, OBE, Chief Executive and Artistic Director of the Roundhouse:

"The Roundhouse exists for - and because of - the young" 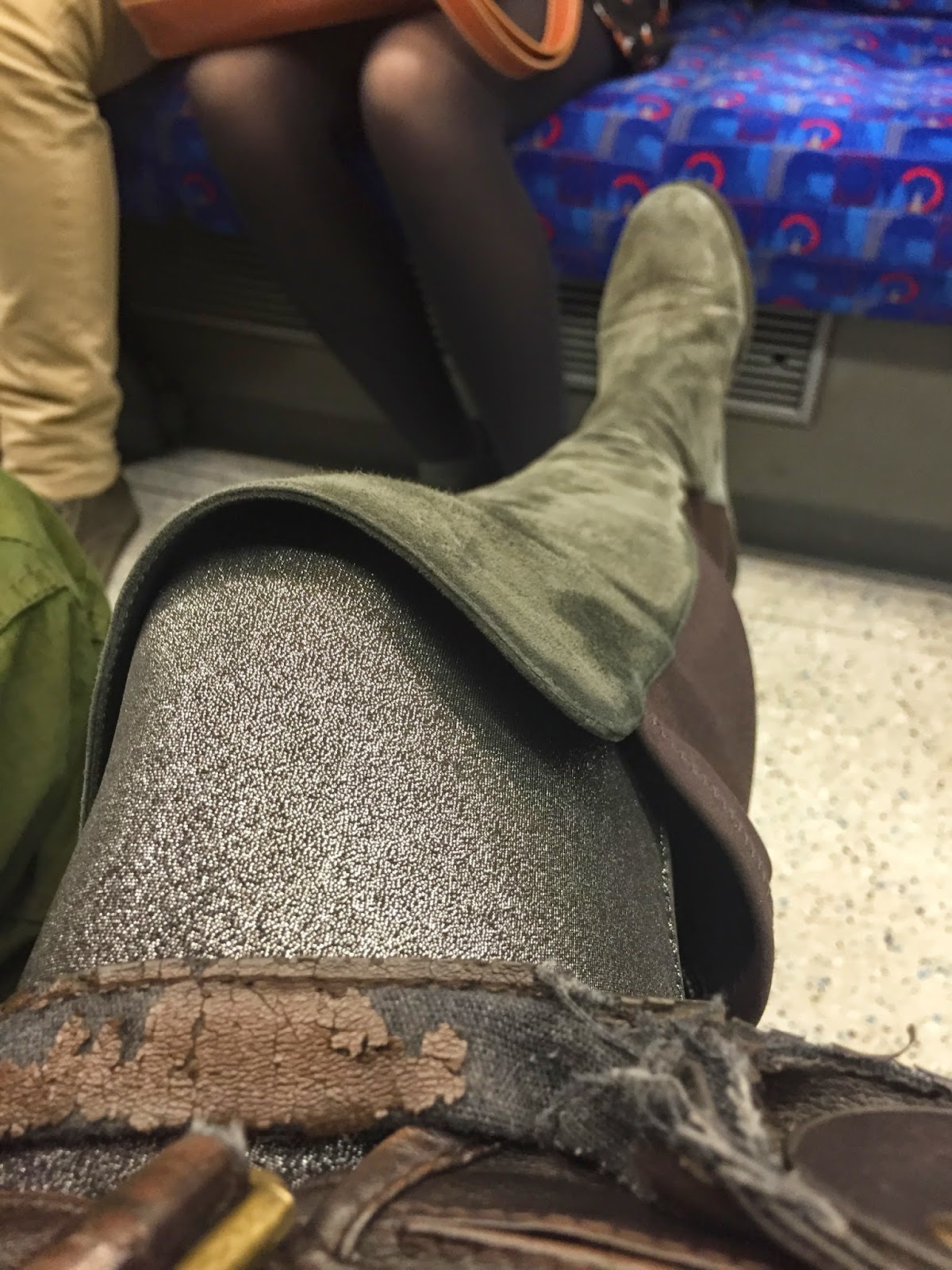 Meanwhile, back at Circus Space it was our last lesson of the term and we had our own open house. This meant for Level 1 on static trapeze pairing up to put together a routine for the end of the class, and for Level 2 inviting family and friends along to watch a group routine with turns of solos and duets. I had kept very quiet about this! There wasn't any dressing up per se, but I was determined to channel the spirit of Flying Fantastic and introduce a bit of glitz, so wore a pair of dark silver leggings found in Portobello Market. Paired with a pair of suede over-the-knee boots to travel in, I felt a bit like Aladdin in a Wimbledon Panto. And it's good to have a some sort of persona when you are performing. It makes you braver, and more entertaining...hopefully! 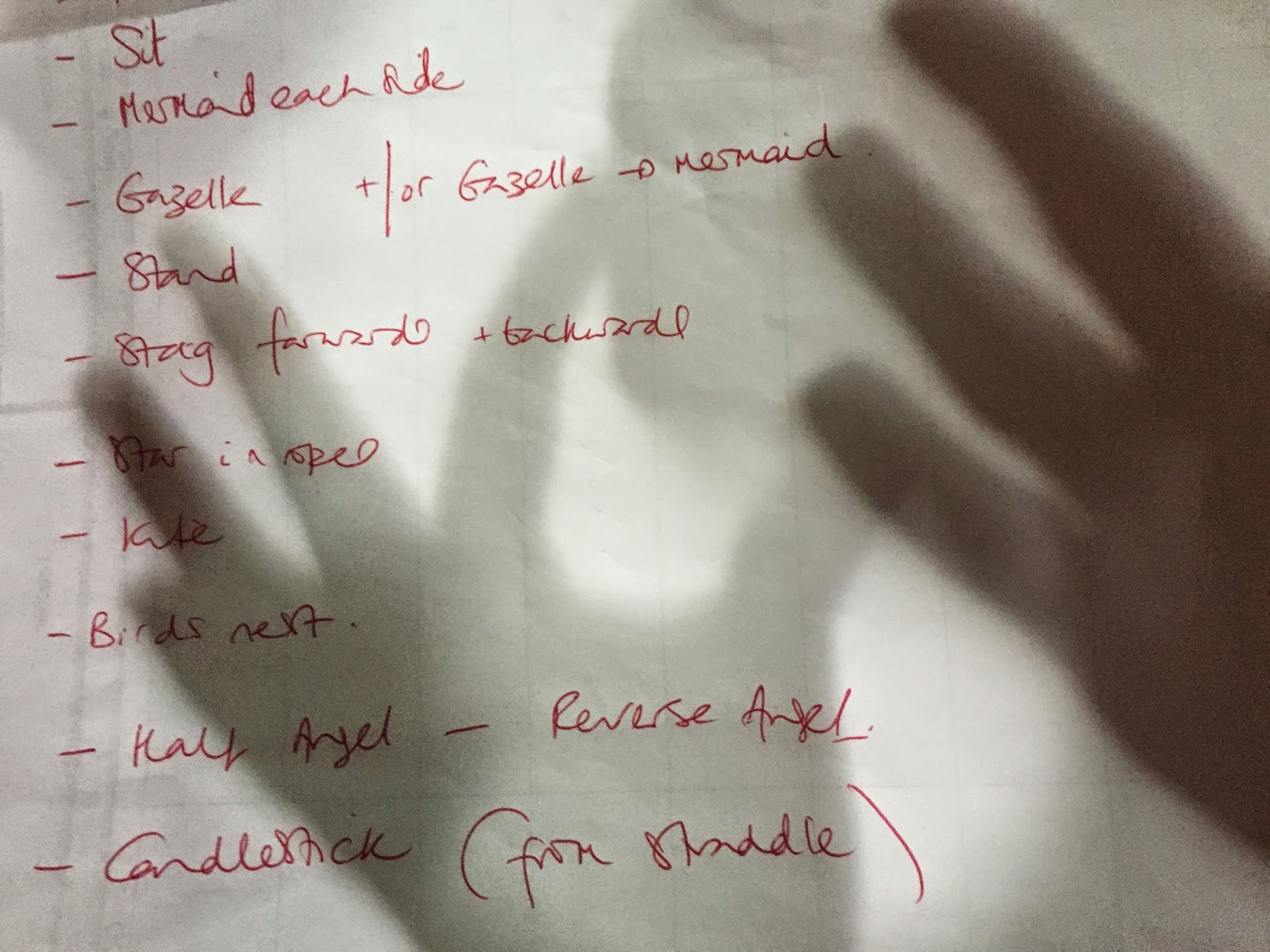 For Level 1 then, I was paired with a guy I'd only met a handful of times, and we had half an hour to put together a routine, which meant going through Layla's list of moves we should know by now and picking of the ones we could both do, and throwing in some music.  I had a sudden craving for Amy Winehouse's Back to Black, which another member of the group luckily had on his phone. Maybe it's because circus lends itself so easily to the whole tango of love, putting the unattainable on display, just out of reach. And also simply because it's a great song. It was so much fun working with a partner, and I achieved far more than I would have done on my own. And for me there was an exquisite satisfaction, similar to dancing a tango, of matching movement and synchronising our sequence. 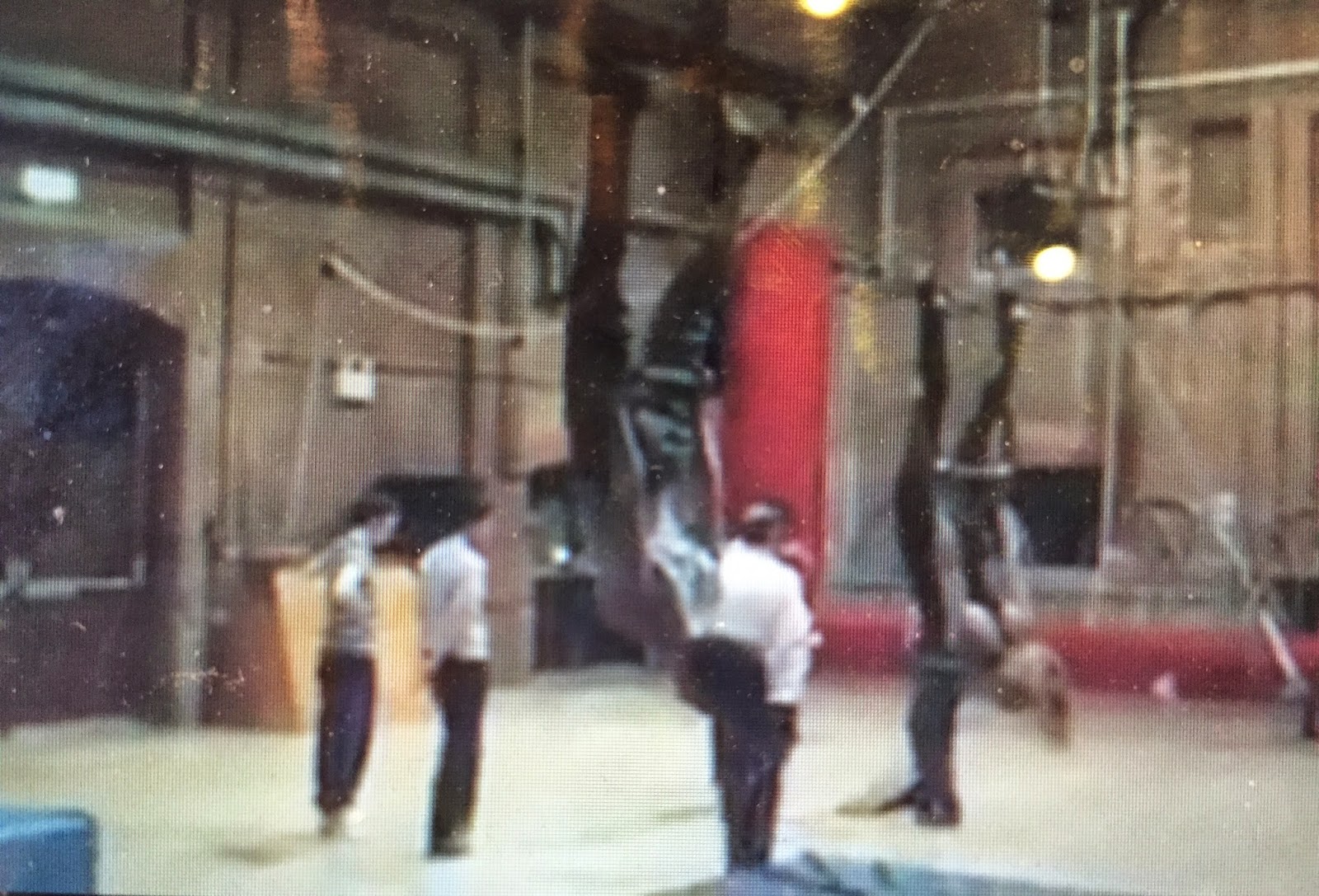 Level 2 was a whole different ball game.  We popped off the trapeze in turn like synchronised swimmers to "Walking in a Winter Wonderland", although in my case that meant spinning my legs right through my arms and landing on the floor, then having to clamber up again to join the others hanging upside down clicking our fingers from side to side. A few beats swinging up to sitting, some free-style leg kicking and then we took turns as a solo or in pairs. My input by this point was utterly minimal, but I had fun marvelling at everyone else as the music moved from the festive crooning of "Twelve Days of Christmas" to Fiery Flamenco, olé!

I got home still buzzing, and was then up til 2 in the morning trying to switch off. If that's the effect of a couple of aerial routines barely two minutes long, how on earth do proper performers ever get any beauty sleep?! Maybe that's one to ask Dorian Gray in a promenade of his townhouse in Greenwich next week (click here) ... 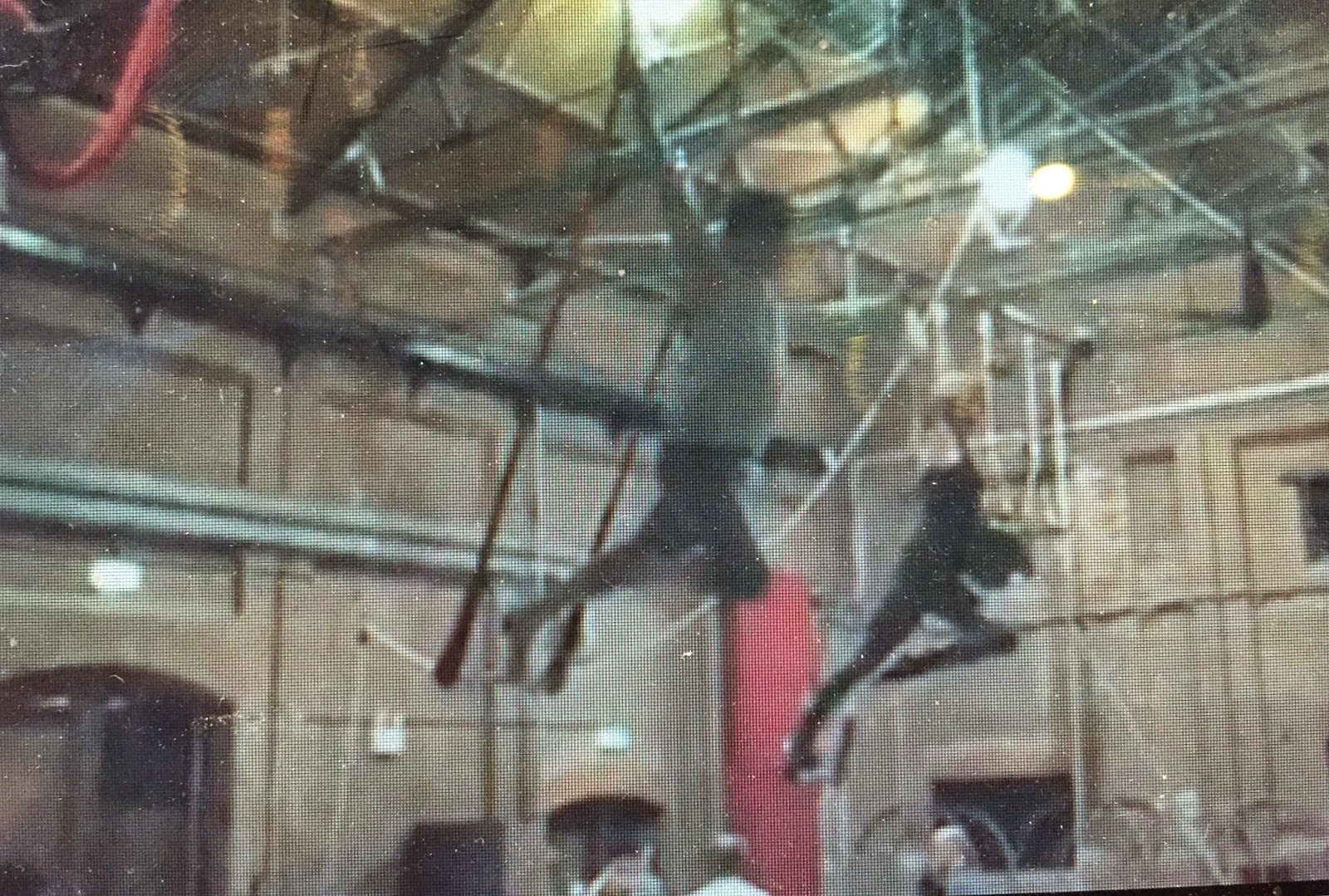 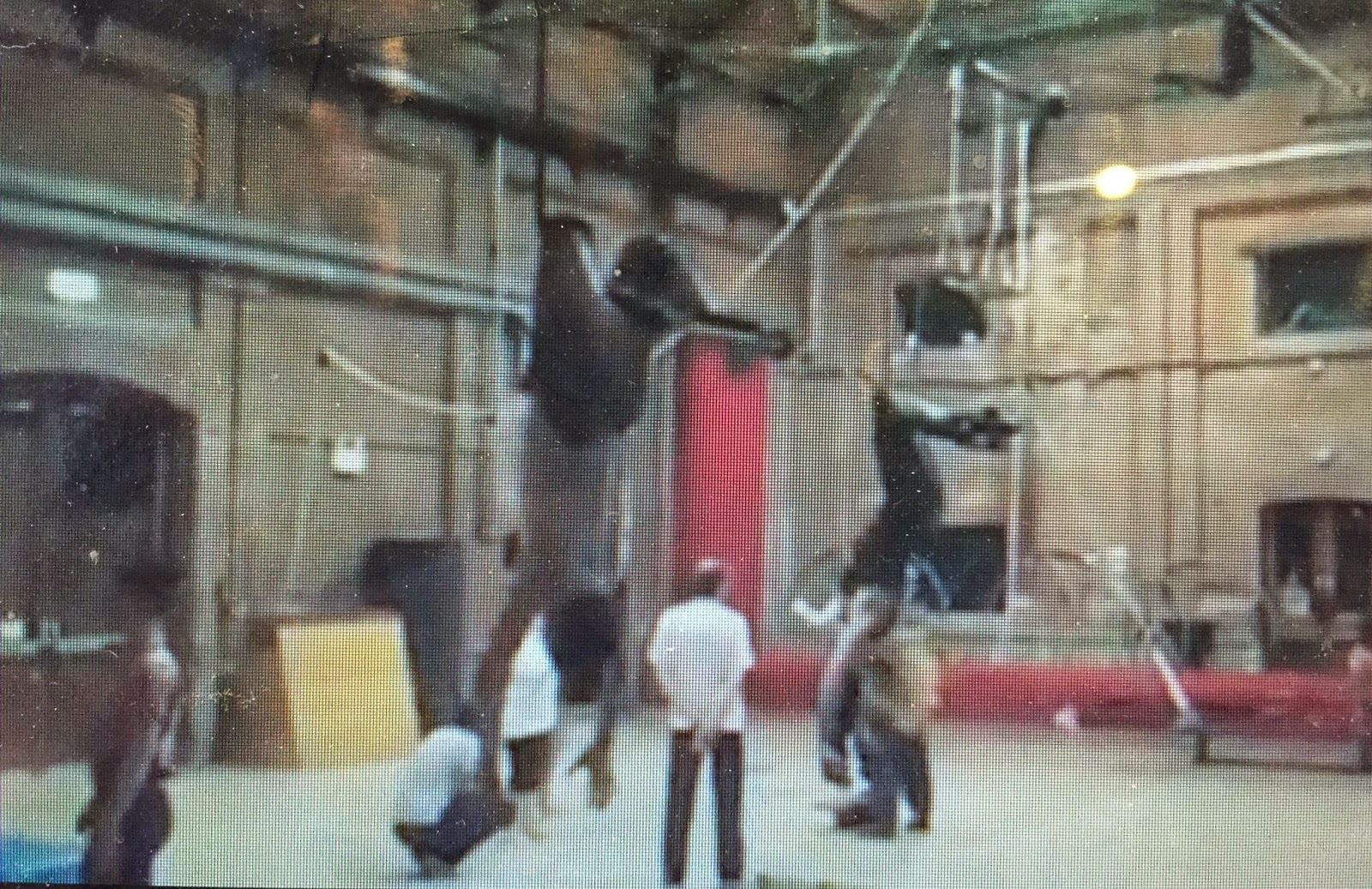 I have a video of my Level 1 performance. It's not perfect, but here's the thing: I look at it and I see another ordinary person trying to do extraordinary things. And they are extraordinary, for me. Looking at it I see not only where I'm at now, but a whole host of possibilities of what I might be able to do in a year's time, or even ten. The following morning I showed it to my children. My six year old daughter turned to me and said "Mum, I am just so proud of you" and that over-rides all and any cringe factor on my part "...even if you didn't do a Mermaid like we did with Airborne Circus" she went on. Ah well, you can't win them all!

There are nearly as many visions of circus as there are people.  Or at least as many visions as people who have enjoyed circus at some point in their life. And for sure, the circus that pops into your head is not the same as the one that is at play in the mind of your best friend. There is only one possible mistake you can make: wanting to possess Circus, with a capital C, as if there were only one, as if it were something that you can own, that you can register as yours, put a little frame around it, mark out your territory, and say: this is circus, and this is mine. So dream of circus and may nobody put limits on you.

Circus, for me, is a state of mind. Anything's possible.