Chapter 192: A Farewell to Ringling Bros

A few of weeks ago a friend sent me a link to a fascinating BBC article "The Circus Leaves Town" (click here) about the imminent closure of Ringling Brothers Barnum and Baileys in the United States.

I have never been to a Ringling Bros show, but I feel a certain connection. Great fans of Barnum the Musical, my children are fascinated by the thought that Barnum was a real person and I had hoped one day to take them to one of the circus spectaculars that was part of his legacy. Over these past couple of years I have virtually met Twitter with Johnathan Lee Iverson, Ringmaster at Ringling Bros for the past 18 years, and Father Frank, a student himself at a Ringling Bros clown school 45 years ago, before he found his religious vocation, who now spends several days a month as a circus priest (see Washington Post article - click here). I sent a message of support to both and received replies in kind that brought home we are all one Family.

It was important to me therefore to stay up and keep vigil watching the last ever Ringling Bros show live-streamed, which in UK time started at midnight and lasted until 3.30am in the morning. I had spent that afternoon watching Hikapee's HOME (see post - click here) and my thoughts now turned to these Ringling performers losing their family home on board the mile-long train - "the town without a zipcode". The rest of the house fast asleep, I curled up in bed and plugged in my headphones, joining a community of some 35,000 on-line viewers the world over. 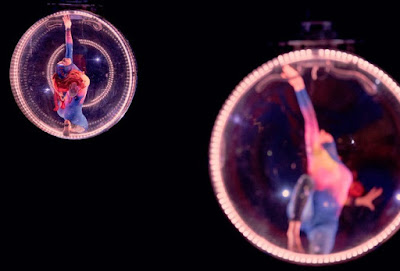 The show had all the slick razzmatazz, joy and fun I would expect from such a Big Top extravaganza.   The opening number involved a piece of apparatus called "The Simet Wheel" that I can only describe as a sort of cross between a wheel of death and a tightwire traveresed in slowmo. The performers were dressed as astronauts,  which tied into the whole concept of a show that was out of this world, as did the synchronised choreography of a dozen performers in aerial globes (pictured) in orbit like mini planets. I was delighted to see Johnathan Lee Iverson's son Matthew as a regular mini-me, and that they were joined by Johnathan's wife and daughter at the very end; this really was a family affair.  I hadn't expected Johnathan to be a singing Ringmaster, although with the handle @BigTopVoice, maybe his rich baritone shouldn't have come as a surprise!

I felt ambivalent about watching the Big Cat act, because it is not part of my heritage or culture. It was interesting, though, to see such an impressive act that is woven into circus history, and to listen to trainer Alexander Lacey giving a moving speech afterwards about his family breeding generations of great cats. Highlights for me included the capering and aerial antics of the Clown Alley brigade, especially Davis Vassallo's tumbling sommersaults on the slackwire, the thrill of the acrobatics on ice with skaters doing three highs and flips into chairs held aloft, and the legendary Cossack riders. My heart went out to The Tuniziani Troupe seeking to perform the elusive quadruple sommersault launching from one flying trapeze to a catch in the other. I imagined the sweat and pressure on this the final night. Hands slipped. Without missing a beat, suavely and sagely Ringmaster Jonathan announced "We are not just the theater of the impossible, we are the theater of second chances..."

Unfortunately it appears their chances have been exhausted. As Johnathan observed in his final speech, this is more than the end of a show, "this is about the end of a culture, a community." Ringling Bros. had a size and history behind it that set it apart. Now many of the performers will be reabsorbed into other circuses - I heard Johnathan's wonderful clowning side-kick Paulo Dos Santos joined Zippos here in the UK only last week -  and those that aren't I hope will forge a new path, one brick at a time. And, if you missed the life-streaming, below is your second chance to catch it, enjoy!

"The circus embodies the risk of wonder. Like all true entertainment, it is more than just an exercise in pleasure, in mere feeding. The Show delights us, but also challenges us to recognize home truths about the human person: That freedom—the iconic freedom of the acrobat—is the product of discipline, not just whim. That man’s destiny includes the ennoblement and care of animals. That magnificence and goodness are worth the expense and hassle they bring in their wake, and that man ought to be shaken out of his cloying obsession with comfort. That human sexuality, maleness and femaleness, is good and wholesome, just as it is dangerous and beautiful. That society is a collaboration of many different people; some wonderful, some odd, some strong, some weak—all necessary. That wonder is on the prowl, like a circus caravan, coming to a town near us, waiting to break into our world."