Lucy loves circus. She also loves the sea. Set on the South Coast in West Sussex, Worthing Theatres' Summer of Circus festival brings the two together for ten weeks and I went down on Friday for the launch. Worthing Theatres had come onto my radar increasingly over the past couple of years programming exciting circus companies, and for being part of the Coasters initiative, one of 11 partners that receives Arts Council funding this year to promote circus and street arts across the country in coastal regions. I wanted to find out more by meeting the Worthing team and getting a feel for the physical space and location. I also fancied a stroll along the pier that extends out from their Pavilion Theatre, which featured in a trailer for a show I had seen earlier this year (see Cul De Sac - click here for video)! 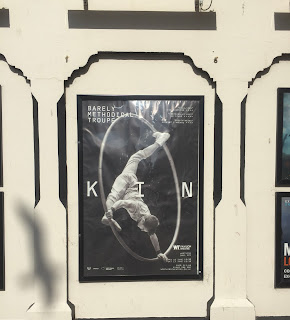 I had never been to Worthing before. In fact, as far as I knew, the last members of my family to go there were my Victorian great-grandparents, holidaying around the same time Oscar Wilde was there writing "The Importance of Being Earnest", naming his protagonist Jack Worthing in honour of the town. There was an elegance to the architecture, and I enjoyed the ten minute wander from the train station to Marine Parade, taking in the Punch & Judy  puppets and jester in a solicitor's front window, next to a statue of Laurel and Hardy, and round the corner from the poster for Barely Methodical Troupe's show Kin, in the shadow of seagulls that, I noticed later, made their mark all down the back of my blazer - clowns everywhere! 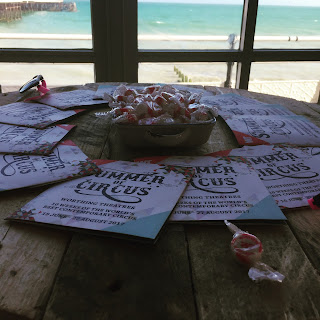 The weather was glorious and the turquoise sea provided a stunning backdrop for the Pavilion Theatre, built in 1926. The building, described by Worthing Theatre's Head of Culture Amanda O'Reilly, "is like a brick and metal Big Top", and actually did have visiting circuses in the early days, with an in-built ramp especially for the elephants and at least one incident of an escaping seal!
It is Amanda who is primarily responsible for bringing a new wave of circus to Worthing. Coming from a background in contemporary dance, and with a love of physical theatre that has a narrative, Amanda was drawn to circus she was seeing at Edinburgh Festival that mixed those two genres, that was both accessible and family friendly without compromising artistic integrity. Dressed in a fabulous circus print dress that evening, Amanda struck me as really good fun, and that was the vibe of the evening she and her team laid on.

Alcoholic slush puppies were served on arrival, and black and pink sunglasses (the theatre colours), on bar tables next to baskets of monogrammed slices of rock on bar tables, augmented the holiday feel. At one end was a DJ pumping out tunes, at another a graffiti artist was painting a stunning collage in celebration of the event. A photo-booth was decked out with all sorts of wigs and accessories and a happy crowd milled around drinking up the festival spirit. 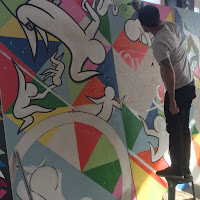 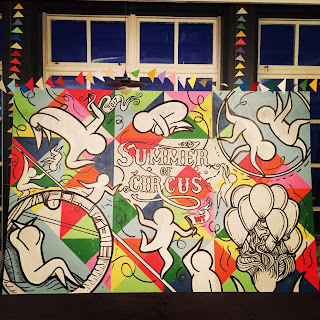 Amanda introduced the festival while a video behind her screened footage from each of the shows. The line-up is notable for the sheer variety on offer as well as the fact that what all these shows have in common is that they appeal to circus first-timers and fanatics alike. There is:  Barely Methodical Troupe's thrillingly funny Kin (post to follow); Acrojou's beautiful outdoors German wheel show The Wheelhouse that I have been trying to see for the past three years; Max Calaf Seve's touchingly gentle and life-enhancing trampolining show Anyday (I've seen extracts at Jacksons Lane and National Circus); the world premiere of Dizzy O'Dare's full-length uplifting tightwire show Rise (see post - click here); Head First Acrobats crazy zombie acrobatics and Cyr wheel antics in Elixir; Ockham's Razor's much-acclaimed, absolute must-see Tipping Point; Kate Lawrence Vertical Dance angelic new aerial composition in a secret location and Metta Theatre's retelling of Jungle Book (see post - click here).

It was a terrific opening night, signalling all the fun that lies ahead this summer - check it out! In addition to the shows, there are all sorts of circus experiences and workshops on offer, including the artists above giving workshops in trampolining, tightwire, acro-balance, wheel and hoop. For dates, listings and more information see www.worthingtheatres.co.uk/summer-of-circus (click here).

A huge thank you for your warm welcome and congratulations to Amanda, Stephen, Pam, Alice and all at Worthing Theatres. It was my first time with you, but certainly not the last, and I'm looking forward to coming back with the family for more circus fun in the sun...