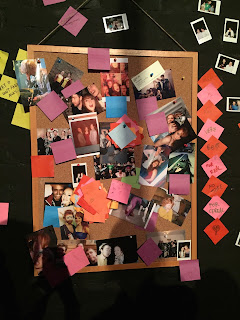 I went with one of my oldest childhood friends, Kirsty, and our boys, to Thorpe Park the other day. The last time I was there I was my son's age - talk about a throwback. As we caught up with each other and reminisced, it struck me, as much as the gravity pummelling me on the Stealth ride, pictured, that our true friends define who we are. Through the highs and lows in life, the joy, the mischief and the heartbreak, they are the ones we can rely to reassure us "this too shall pass". It does pass. And they remain. And on this circus journey I've met people along the way who I trust implicitly - in each evening class at Circus Space (the National Centre for Circus Arts) there has been an easy camaraderie that forms in a very short space of time because we are enjoying ourselves, and the training is intense. When there, I sometimes catch glimpses of those on the full-time three year degree course, training day after day, through the fun and the pain, and wonder at how much they must mean to each other. So I was interested to see Silver Lining's Throwback at Jacksons Lane, made up of graduates from Circus Space, weave personal testimony in with circus skills to explore friendship and identity. The joker in the pack, as it were, was Eric Bates, who had come over from Canada especially to join them. I had last seen him in Séquence 8 at Sadlers Wells (see Chapter 39 - click here), a show that explored relationships through acrobatics. A perfect fit then. 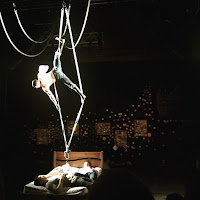 As though underlining the harmony of friendship, Throwback began with performers singing acapella as they descended the stairs. The stage was a bedroom, the walls covered in colourful post-it notes, and noticeboards for each performer hung covered with old snapshots and memories that we were invited to explore afterwards. It was a cosy, safe space, one that invited confidences and confessions. All in a line at one point, each performer stepped forward at random announcing a self-defining fact - coffee, ginger, cat, 23, dinosaur (grrr), The Notebook (aw), lonely (cue group hug), single, single, single... (seriously?!) - that gave a handle on their dynamics and individualities. I enjoyed the joshing among them and the relaxed, familiar vibe. There was nothing relaxing about watching them though, deftly executing gravity-defying turns, both on the central Chinese pole and in their respective specialities. 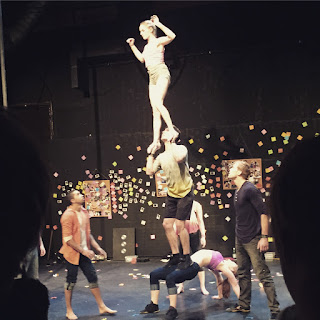 Isis and Nathan described the arc of their relationship in tightly choreographed acrobalance sequences with drops and catches that were both taut and tender. I still can't quite get over the consistency and searing beauty of Niamh's voice as she sang a ballad while doing inversions on handstand canes. Tom's comic reflection on the nature of auditions to the tune of "That's Life" had notes of slapstick, underscored with utter brilliance. It was a sheer delight to see him precariously balanced on a suspended bridge, then thread himself through to hang from his feet on the underside and "walk" along. Watching Lj on straps was adrenalin-pumping in the first instance, set to an urban beat. The second was more lyrical, as, while on straps, his feet caught and spun reams of reel from an old home-movie, bringing nostalgia back into the frame. Lydia, recipient of the group hug earlier,  hung her heart out on the cloud swing, with spell-binding vulnerability. Eric's memories of his father,  the gruff response to his redundancy, the eventual reconciliation and quiet pride in his son's life choice (when will Eric give up? when his knees give way) was as touching as his world-class cigar-box juggling was mesmerising, and I loved the moments when the other performers entered the fray. The evening ended on a high with a whole series of tricks that showcased yet again each performer at their peak, but in the spirit of friends  messing around having fun. 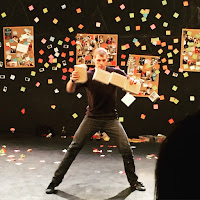 I saw the show twice, both times with another close friend, Andrea, from my accountancy days, who has been watching circus long before I started this adventure. The first time we bumped into each other on the tube on the way to Highgate, catching up and rewinding back to our 20s, in high spirits before the show even began. The second, time fast forwarded as we were now Mums bringing our circus-loving children along for the ride, and it was a joy to finally meet @JaneCircus from the Twittersphere, then CEO of Circus Space, who was doing the same with hers. Our kids enjoyed the tricks and spectacle, and we got the message.

It was a lovely touch that the performers circulated round the audience beforehand, chatting, taking polaroids for us to seek out later, helping people find seats. Grounded, is a word that springs to mind when describing these guys, ditto warm, and kind. In the roller-coaster of life, these are the sort of friends you want to have your back.