Highlights from The Fringe - Day 2: Pole 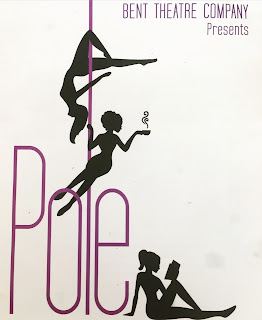 In the five minutes it took me to run from Velvet at The Famous Spiegeltent (see previous post) back to my hotel I was a sopping, bedraggled mess. I had quarter of an hour to strip off, wring out, dry and reapply and then turn heel to Cowgate’s Underbelly, and the venue Dehli Belly, to see Bent Theatre Company’s Pole. The sensible thing to do would have been to call it a night there and then, and melt into a nice, hot bath. But actually, as I have just read in Ideapod (www.ideapod.com - intelligent people have one thing in common...) the smart money is on the night owls. What a hoot.


Unlike the the rain. The rain was shedding it down as I squelched and squirched my way up the Mound. Again. An old friend of mine, Jane, arrived, like me, in the nick of time, and was a sight for sore eyes. Weaving our way through the dense mass of bodies at Underbelly, I was in half a mind to sod the play and have a decent catch up over a drink instead. Did I really need to see an educational piece of verbatim theatre exploring the attitudes and reality of Pole when I've been living it for the past couple of years? Well, yes actually. I thought it was important to witness a show that may slip under many people's radar, certainly in the circus world, and report back. The thing is, in circus you have Chinese pole. A pole generally covered in rubber, requiring shoes and layers of clothing to protect a body as much as possible from friction burns. It still hurts, I hear, but you are not flayed alive. Strip Chinese pole, of its prefix and rubber, and you are left with a smooth metal pole requiring minimal clothing to maximise skin exposure, and so grip. Here endeth the lesson.


As to the show, I was surprised by what I found. Yes, it does have a message to get across, but it is loads of fun. The low ceiling and dungeonesque space gave barely enough room to swing a cat, let alone allow three women to swing on the poles erected, but Amy Bellwood, Anais Alvarado and Lyndal Marwick managed a good few turns and inversions, and looked decidedly pro. Actually, it turns out that one of them, Lyndal, is semi-professional, winning her first pole competition recently, an event that was compered by Sam King (click here for my post on Pole in the Park). The show itself was an intelligent, hilarious and moving exposition of the pole scene in all its incarnations, though while it touched on the wide variety of shapes, sizes and skill sets you get in an average pole class, Amy, Anais and Lyndal are all young, slim, beautiful and very talented. Any guys who hadn't read the small print and were coming for some late night titillation must have thought they struck gold. And the girls play on that with a touch of bump and grind in heels to get the show going, before they pulled the rug from underneath.

Anais played the City girl-next-door, with her own way of unwinding at home after a long day at work and enjoying the shapes she can make with her body; Lyndal is the sporty polefit instructor from Oz and up for a challenge whose accent lets her get away with some hilariously frank, and grotesque observations; Amy is "a natural", a dancer who came to pole through stripping and is an unapologetic tease. For each, in their own way, the practice of pole is empowering. This being verbatim theatre, they are presumably using the words and stories of actual women, with some artistic licence, and their stories, told with warmth and humour, ring true. Where it loses me slightly is when the girls merge into new characters, just as we've been getting a handle on the old ones.

Anais is now a stripper. Amy turns into an undercover agent exposing mistreatment and offering assistance to young girls forced into the underbelly of London sex clubs, where they are pretty much chained to the pole. The descriptions are harrowing. You get the whole raw, bloody deal as Lyndal becomes a one of the victims, and it's not pretty. But there is a way out, and hope. The uplifting finale is a gracefully choreographed sequence in which the three take to the poles in white dresses, a redress of sexuality and a reclamation of the purity of lines in pole aesthetics. Beautiful in its simplicity.

A percentage of Pole ticket sales are going to Eaves Charity, a London based charity that helps female victims of sex trafficking. To learn more about their work see www.eavesforwomen.org.uk