Highlights from Edinburgh Fringe - Day 1: Book of Love and Bromance


“Right, here's the deal - I'll look after the kids while you go to the Fringe, but you get all the writing up done before you come home. Deal?"

The devil of a bargain. I smiled sweetly and surreptitiously moved my return flight booking from crack of dawn to late afternoon, and here I am at Edinburgh airport on Sunday with ten shows still to get through and countless stories to weave into the mix. Thank you Easyjet for delaying my flight by an hour, still, if you had just given me the heads up an hour earlier I could have made it to Clément Dazin's Bruit de Couloir, merde! See Lucy Ribchester's review for The List on this "eloquent meditation on life": www.edinburghfestival.list.co.uk and if you are still in Edinburgh do go and see him.

Now, though, it's time to rewind to Friday afternoon, newly arrived in Edinburgh, two shows under my belt. Next up was was Lindsay Benner’s Book of Love at Venue 88, aka Just the Tonic at The Caves. I should have being going to the much feted La Meute, a show that The Circus Diaries' Kate Kavanagh, familiar with my blog and my tastes, assured me was right up my street (a wolfish pack of sexy French male acrobats for Petit Capuchon Rouge here), but here’s the thing: Lindsay is a friend of an old university friend, over here from Chicago for her very first Edinburgh Fringe. When I found out that to boot she was both comedienne and juggler, think Lucille Ball meets Charlie Chaplin, I was sold. I was also keen to explore spaces beyond Underbelly's Circus Hub, this is The Fringe, after all. Venue 88 is an intimate cavern on the first floor with a stage at the end, think the Vaults.  I loved it instantly. Lindsay was terrific, sporting the 50s chic, she had a presence and charisma that snapped the audience into shape in an instant. I was whipped up in front of the audience with a partner for a trick involving  pingpong balls (what happens on stage, remains on stage), while another guy was her date for the evening as she worked through chapter by chapter of her Book of Love. Juggling all sorts of domestic utensils with an edge, to a great retro soundtrack, Lindsay served up course after course of comedy with flair, panache and supreme confidence.  Check her out. 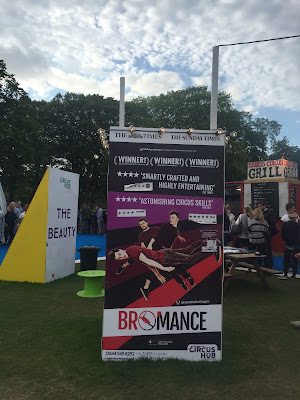 Afterwards, I raced back to the Circus Hub for Barely Methodical Troupe's (BMT) Bromance. Finally. Winner of last year's Total Theatre and Jacksons Lane Award of Circus at the Edinburgh Fringe, among a whole host of plaudits, these guys have burst onto the scene. One of my sisters booked in to see Bromance at The Fringe on Donald Hutera's recommendation in The Times, and my visible disappointment, wistfulness and FOMO prompted my other half to volunteer to look after the kids to let me go up to the Fringe as well, on the aforementioned condition. So Thank You.

Bromance was back at the Circus Hub and in the smaller of the two tents, packed to the rafters. I was pretty much the last in, but the view from anywhere in that tent is great and the atmosphere was electric, charged with expectation. BMT comprises Beren D'Amico, Charlie Wheeler and Louis Gift. Graduates of Circus Space (National Centre for Circus Arts), the fact that they are great mates, whose friendship has been cemented by training together, where trust and awareness of each other's moods, actions and reactions is crucial, shines through. I defy anyone to see this show and not be immediately won over by their characters as much as their circus skills.  I laughed long and hard at their clowning around with highly skilled acrobatics and was touched by the moments when they moved the game onto another level, exploring the balancing act of triangles, the one who gets left out, the pain of friends aren't there to catch your fall. The hand to hand work was not only staggering, but for the first time you are prompted to consider the feelings of the base, Louis, the unsung hero of the act as the flier, Beren, swoops away with the glory. Cyr wheel is a particular love of mine. I have never (yet) had any desire to learn it, but find it mesmerising to watch, and to see Charlie in action exceeded all expectations.


Time spun by too quickly and suddenly the house was on its feet with a standing ovation. Yet that was not the end. It turned out that during the performance an earlier injury Beren had sustained had prevented him continuing with the second half. They didn't need to explain that. I had a sense something was missing, from having read so many reviews in the past - this time last year in The Circus Diaries for instance (www.thecircusdiaries.com - click here), yet I would have left there elated with what I'd seen, and I'm sure the majority of the audience would have left none the wiser. But these guys are the real deal - they have a story to tell and it matters to them that their public have the full picture. Beren's acute disappointment, and Charlie and Louis' concern for him, became ours. That these guys have been working on this show that relentlessly pushes physical boundaries for a year now, and the courage and concentration to deliver it with such ease and authenticity, hit home. Cue second standing ovation and thunderous applause that raised the roof. Congrats guys and wishing you well.