Highlights from the Edinburgh Fringe - Day 1: Elephant in the Room

Vive le fringe!* I may have missed La Meute and Clément Dazin's Bruit de Couloir (see previous post) but there was still a ton of francophone circus to discover. First of my double-bill on Friday night was Cirque Le Roux' The Elephant in the Room, which is one of the five circus acts to be short-listed for the Total Theatre and Jacksons Lane Circus Award** this year.

Set in the more intimate of the two tents at the Circus Hub, where I had earlier seen Bromance (see previous post), Cirque Le Roux invited us to step back in time to the heavily stylised 1930s world of silent comedy and film noir. Credits roll, projected on the back wall, introducing us to the cast. Enter Miss Betty (Lolita Costet), grande dame of the chateau, though evidently barely reconciled to her newly married title of Mme Barick. Dressed in a bridal outfit with a bouquet tinged with a grey decay, she has an air of Miss Havisham crossed with Lucretia Borgia as she throws back her head and gives a malevolent cackle, wielding a vial of poison. Her husband John Barick (Yannick Thomas) is clearly putty in her hands, though not such a walk over when it comes to the antics of their deftly bumbling butler le Jeune Bouchon (Grégory Arsenal) - literally the Young Cork, part Harold Lloyd, you get the drift. Their relationship has something of the dynamic of Manuel and Basic Fawlty about it, though the slapstick acrobatics take it to a whole new level. Finally meet the anglophone Mr Chance (Philip Rosenberg), an enigmatic Great Gatsby of a character meets An Inspector Calls, keen to emphasise his popularity with the ladies as a mark of social standing, while secretly fond(ling) of le Jeune Bouchon. Was this layered sexuality meant to be the Elephant in the Room, I wondered? 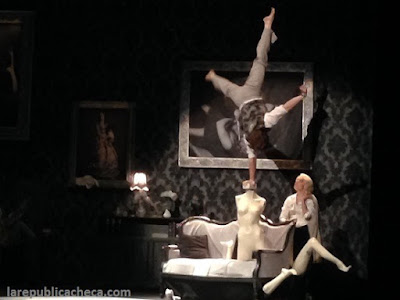 I loved the monochromatic set and costume design: the oil paintings on the wall of the smoking room that changed with the narrative, the divan that became a surreal piece of circus apparatus. As Miss Betty squeezed through its back to slip away from the clutches of Mr Chance, he was left holding just a leg, actually a mannequin's limb that screwed in to the end of the couch to become literally a leg up (pictured). A corridor of lampshades dropped down from the rigging at one point to create a passage for a touching handstand duet between Mr Chance and le Jeune Bouchon. The physical contrast between the tiny (yet steely) Miss Betty and her giant of a husband made their daring duos all the more dramatic.  I'm just giving a flavour here as there was so many diverse elements to take in delivered with phenomenal energy. Basically the show was a heady mix of a farcical Christie whodunnit (or willshegettachance?) theatre crossed with physical theatre of acrobatics, tap-dancing, a swing of bodies, tumbles in the air, an astounding group routine on Chinese pole, and that four-high human ladder. Seat allocation is only in the larger tent, so it was by chance I ended up sitting on the front row between experienced circus performers, and I felt something of an ingenue letting out gasps of astonishment, hands clasped or clamped over my dropped jaw, but the tricks held me in thrall and left me reeling.  Hats off. Chapeau.

*Vive le fringe! is actually the motif of the events at the Institut français d'Écosse, spreading the love  of all things French through Scotland since 1964. It is hosting five fringe events this year including Bruit de Couloir and L'Enfant qui..., also highly recommended. Find out more at their website www.vivelefringe.org (click here) and see trailer below:


**Shortlist for the Total Theatre and Jacksons Lane Circus award are: