Right, I'm on festival time here in Edinburgh. That means borrowed time. Half an hour to catch up on a full-on day and six shows back to back. It will be raw, rough and messy, though hopefully legible. This is my first Edinburgh Fringe, and what a great year to start on. Last year saw the creation of the Total Theatre and Jacksons Lane Award for Circus, won by Barely Methodical Troupe's Bromance, and the festival has always had circus shows, often located in The Meadows, this is the first year of Underbelly's bespoke Circus Hub. A good place to start then, and I made it just in time for curtain up on Ockahm's Razor's double bill ARC & Every Action...

What an auspicious beginning. In ARC, three characters, a man and two women, are shipwrecked on a suspended metal raft. We watch the relationships between them ebb and flow like the tide, as child's play gives way to adult tensions, highly charged. As the triangle tips, so too does the raft, now suspended on two central points rather than four corners. The manoeuvring of the destabilising apparatus reflected the delicate  work required to recover balance in the relationships. It was beautiful, sexy and fluid. In the second half Every Action... four characters come together, each sitting on a box of a different size that connote a certain pecking order, soon to be jumbled up. There is a rope threaded through a pulley and they balance each other out - as one pulls on one side, the other is lifted - in this game of cause and effect, all of us impact each other's actions. The rope sequences were stunning to watch and inventive. At one point, the end of the rope being pulled is missed and it de-threaded. Having been told by one of the ushers that the rigging columns would be in use during the show, I assumed that the moment one of the cast scales up to reloop the rope was actually part of the narrative. Actually, it wasn't, but for me, along with rest of the audience, it gave a fascinating depth to the show to get a glimpse of the work that goes on behind the scenes.  If you are up in Edinburgh, please go see it. Take the family. Go alone. It's a fantastic show and has a wonderful rapport with the audience. 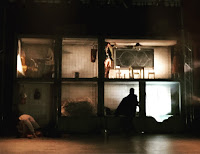 Next up in the Circus Hub was Cirk La Putyka's Dolls. A dark, raw show which had the most flip-taking duet on static trapeze that I could watch again and again, and a superb twist on a acrobalance duet where two hands are bandaged into one arm. I also enjoyed the choreography of the puppet sequence - one performer strung out between the rest. There was comedy and laughs with a Pinteresque menance constantly bubbling underneath exploding at points into violence.  Check out The Circus Diaries review and interview with director Rosislav Novák: www.thecircusdiaries.com - click here.


Later that afternoon I bumped into the guys from Ockham's Razor outside (pictured), fooling around with ad-lib acrobatics on a pole - jeez, do they ever stop I wondered? Not for this month at least!